Belgium manager Marc Wilmots says his team's visit to Wales on 12 June will be their toughest Euro 2016 qualifier.

Belgium replaced Wales at the top of Group B with five games left after Marouane Fellaini's goal secured a 1-0 win in Israel on Tuesday.

"For us it's important to focus on winning each game," said Wilmots.

"We were in Bosnia, we've been in Israel and coming up a match against Wales, which will be the hardest. After that we'll have an easier calendar."

Belgium and Wales are both unbeaten after playing five of their 10 Group B games, and the match at Cardiff City Stadium has already sold out.

Chris Coleman's Wales drew 0-0 with the 2014 World Cup quarter-finalists in Brussels in November.

Wolves and Wales full-back Sam Ricketts said: "It's a huge opportunity for us.

"With both sides five games and 11 points, top of the table, what a fixture.

"At the start of the campaign this is what we wanted to achieve at this point. We wanted to be in the thick of it, in the running.

"I don't think many people probably believed it or thought we were capable of it, but we are there now and these are the games that we are striving to play in." 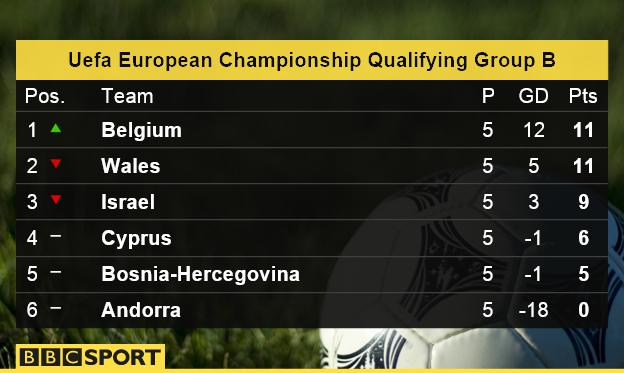