Liverpool forward Raheem Sterling will not be leaving the club in the summer despite a breakdown in talks over a new deal, says manager Brendan Rodgers.

The 20-year-old told BBC Sport he is motivated by trophies not money after rejecting a £100,000-a-week contract.

"Liverpool are one of the superpowers of football and if the owners don't want to sell, they don't have to," said Rodgers.

Rodgers added: "Concentration should be on his football. If his ambition is to win trophies that's aligned with what we do here."

Rodgers added that the club had not given Sterling permission to speak to BBC Sport and that he thought it was a "mistake" to carry out the interview.

"There was no permission from us," he said. "He will learn. We all make mistakes in life, especially when we are young.

"I think the kid has tried to put off all talk about contract and money. For now hopefully the focus will be on football." 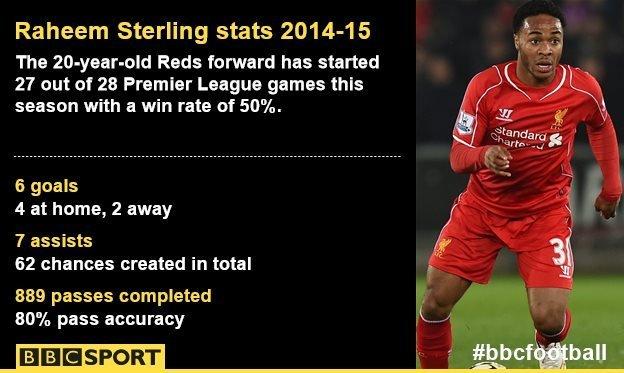 Sterling, who joined the Reds from QPR in 2010, says he will not discuss a new contract with the Reds until the summer.

"I just want to take the time to think about what I've achieved in my career so far, where I need to go and what I need to do to get better as a player," he said.

Newspaper reports have linked him with moves to Manchester City,Arsenal,Real Madrid and Bayern Munich.

But Rodgers said he and Sterling were "relaxed about the situation".

"This is one of the great clubs of the footballing world and, for Raheem, to be playing here it's an honour," added Rodgers. "He understands that, he sees that."

Former Liverpool defender Mark Lawrenson, who won five league titles and a European Cup with the club, said Sterling is not yet good enough for the top clubs in Europe.

"He's 20 and not going to Real Madrid or Barcelona or Paris St-Germain," Lawrenson told BBC Sport. "He's not at that level and he has a lot of work to do."