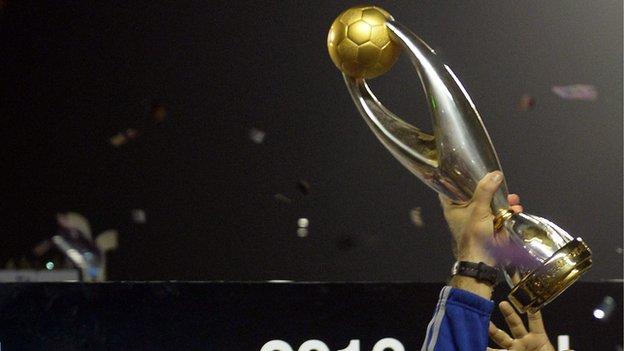 The Black Eagles won the last-32 tie 3-1 on aggregate after coming from behind in Banjul three weeks ago to force a 1-1 first-leg draw.

Setif can expect tougher opposition in the round of 16 where they will tackle Moroccans Raja Casablanca or South Africans Kaizer Chiefs.

Raja won the first leg 1-0 in Durban and are favoured to advance after the return match in Casablanca on Sunday.

The tie was all but over as a contest after the Algiers outfit won 5-1 at home in mid-March despite having a player sent off midway through the second half.

Elsewhere this weekend, Congolese side TP Mazembe defeated South Africa's Mamelodi Sundowns 3-1 to advance to the last sixteen with a 3-2 aggregate win. Sundowns had been leading 1-0 from the first leg.

Nigerians Kano Pillars bowed out of the Champions League despite a 2-1 home victory over Moroccans Moghreb Tetouan.

A four-goal first-leg deficit proved too costly for Pillars and they were eliminated 5-2 on aggregate.

Claims by Kano stars that they would stage a miracle recovery at the Sani Abacha Stadium were nullified after 33 minutes when Mouhsine Iajour put Tetouan ahead with his fourth goal of the tie.

It left the Nigerian champions needing six goals in 57 minutes to win the last-32 contest.

But the best they could manage was two goals courtesy of Tony Edjomareigwe just past the hour and a Rabiu Ali match-winner one minute from time.

This was the third consecutive early Champions League exit by Kano after a 2013 first-round defeat against AC Leopards of Congo and a preliminary-round loss to Vita Club of the Democratic Republic of Congo last year.

Their best showing in the competition came six years ago when they lost to fellow Nigerians Heartland in the semi-finals.

Tetouan, who scraped past Malians CO Bamako in the preliminary round, meet Egypt's eight-time African champions Al-Ahly in the final qualifying round for the group stage.

Momen Zakaria scored in each half to give Ahly a 2-0 victory over Rwandan military outfit APR in a spectator-less Cairo stadium.

Authorities have barred spectators after at least 20 football fans were killed last month during a stampede following clashes with security forces in the Egyptian capital.

Ahly took a two-goal lead into the return match and any hope of an APR comeback was dashed on the half hour when recent signing Zakaria put the Red Devils in front via a header.

He struck again just after half-time, tapping in a rebound after a Saad Samir header had been blocked.

Stade Malien of Mali and El-Merrikh of Sudan also progressed.

Stade came from behind to win 2-1 against Gabonese visitors Mangasport in Bamako and complete a surprisingly comfortable 5-2 overall success.

Merrikh fell 2-1 away to Angolans Kabuscorp, but the 76th-minute goal from Bakri Al-Madina in Luanda proved decisive as it gave his club a 3-2 aggregate victory.

North African giants Esperance look set to reach the last-16 stage of this year's competition which offers a $1.5m first prize. Tunisians Esperance returned from Cameroon with a one-goal lead over Cosmos Bafia.

Kenyans Gor Mahia trail AC Leopards 1-0 ahead of the return fixture in Congo Brazzaville and the famous Nairobi club are battling to fund the trip to central Africa.