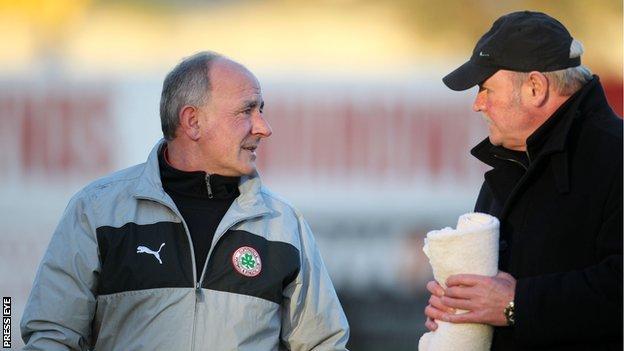 The battle for European places and the fight to avoid relegation take centre stage on the first day of post-split fixtures in the Irish Premiership.

The postponement of the potential league decider between Linfield and Crusaders focuses attention elsewhere.

Warrenpoint Town play Institute in a vital match at the foot of the table, while Ballinamallard face Dungannon.

Coleraine and Ballymena United have derby bragging rights to play for at Ballycastle Road as the Sky Blues aim to close the gap on their seventh-placed rivals to one point.

"If we beat Coleraine we are right on their tails as we aim to finish seventh," said Ballymena manager Glenn Ferguson.

"Looking ahead to next season, we have to be more consistent and ruthless in the league and work on not conceding so many goals."

Third-placed Cliftonville lead Portadown on goal difference and the Reds have George McMullan available again after a knee injury and Jude Winchester back from a hamstring problem.

The Ports are without influential midfielder Robert Garrett, who begins a two-match ban following his dismissal against Dungannon Swifts last month.

Manager Ronnie McFall awaits fitness reports on goalkeeper David Miskelly and centre back Garry Breen, who both have hamstring injuries.

"My players need to get the Irish Cup final out of their heads and concentrate on each game. We have to focus on every match between now and the end of the season," said McFall.

Glentoran boss Eddie Patterson, named Football Writers' Manager of the Month for March, must plan without prolific striker Curtis Allen, who is suspended for the clash with Glenavon, as well as Tuesday's game against big Belfast rivals Linfield.

The in-form Lurgan Blues have taken 16 points from a possible 21 in their last seven league fixtures and coach Nigel Law admits they now have a top-four finish in their sights.

"We are not far away from being a top side in this league - we just want to keep improving and see where it takes us," observed Law.

Basement side Institute lie five points behind Warrenpoint ahead of their crunch game at Milltown and 'Stute manager Paul Kee has vowed to "make one or two changes to his starting personnel".

"If we lose this one, we are definitely going to be facing an uphill battle. We have to be much, much better defensively," admitted Kee.

Both Ballinamallard and Dungannon boast just one win from their last five league outings, but the Swifts, who are ninth, enjoy a three-point advantage over Whitey Anderson's Mallards.

"This is probably our cup final. If we beat Ballinamallard, we can afford to relax a wee bit as regards drawing clear of the relegation zone," said Dungannon manager Darren Murphy.