Cristiano Ronaldo was hailed as a "phenomenon" following his five-goal display in Real Madrid's 9-1 thrashing of Granada on Sunday.

"Cristiano is a phenomenon, he is always looking for goals," said Real team-mate Karim Benzema.

"We're in good shape to continue like that until the end of the season."

France striker Benzema scored twice during a five-minute spell early in the second half that included Ronaldo's fourth goal, with Real leading 7-0 by the 57th minute.

Granada pulled one back through Robert Ibanez, but Diego Mainz's own goal and a late header from Ronaldo sealed Real's emphatic win.

It was the Portugual star's fifth hat-trick of the La Liga season, and the first time he had scored five in the same game.

"Him (Ronaldo), Bale and me, we're in good form, like always," added Benzema.

Real coach Carlo Ancelotti was pleased with Ronaldo's performance, which saw the ex-Manchester United forward become only the third player after Raul and Alfredo Di Stefano to score 300 goals for the club.

"He has improved just as the team have, said the Italian. "This is the first time he has scored five goals in a game and that is good news for everyone: for him, for the team and in terms of the upcoming fixtures.

"We played with a good tempo and scored bags of goals. We come away from this happy but this is just one game and we have other important ones coming up.

"It's simple mathematics. It's better to win nine games 1-0 than one 9-1. The team are back to playing as desired, just like they have played many times before." 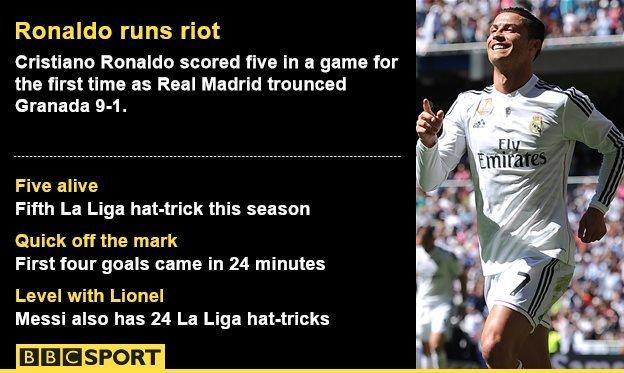