Jermain Defoe admitted he was overcome with emotion after his superb volley gave Sunderland a 1-0 derby win over Newcastle at the Stadium of Light.

The former England striker, 32, shed a tear as his goal lifted Sunderland up to 15th in the Premier League.

"It was an unbelievable feeling when it went in," said Defoe. "I was very emotional for some reason, as everyone wanted the three points so badly.

"It's one of my best. Even a tap-in would be massive in a game like this."

Defoe added: "I tried to blank it out because if you think about the pressure too much you get tense and can't perform.

"The lads have been telling me what today would be like, with the atmosphere, and it was amazing. We've beaten them for a fifth time in a row and what a feeling. 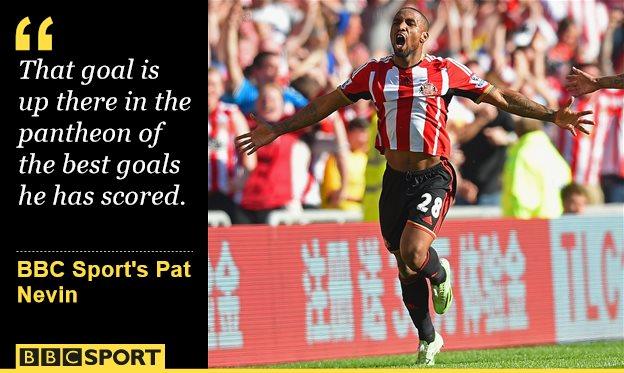 "As the ball was dropping I was just concentrating on the strike. During the week I've done a lot of shooting and as soon as it left my foot I knew it was in."

Krul was seen patting Defoe on the back of the head as the teams headed down the tunnel at half-time but rejected social media claims that he was resigned to a fourth successive defeat.

The Dutchman said: "What I actually thought I probably can't repeat on television because it wasn't nice.

"It was a fantastic goal and everyone accepts that. What I actually thought was more in the region of 'what a lucky guy he is', but with a bit more venom behind it.

"Listen, I've been at this club for 10 years and I'm as hurt as anybody else, so whoever wants to put this negative light on me... it's not justified.

"I'm a Geordie. I'm going home with a lot of pain in my heart.

"To see those travelling fans going back to Newcastle without a win again, it hurts me as much as them."

"The thing I liked about Defoe today was that he got himself into some great positions but they didn't have the quality to pick him out. In the end, the goal he scored came from nothing and he still did the right thing and chased down. It is great professionalism from him, he has given 100%.

"The one moment of quality - Defoe's volley - settled it. It is up there in the pantheon of the best goals he has scored. Put three goalkeepers in that goal and that is not getting saved.

"Signing him could be the best bit of business they have done in many years."