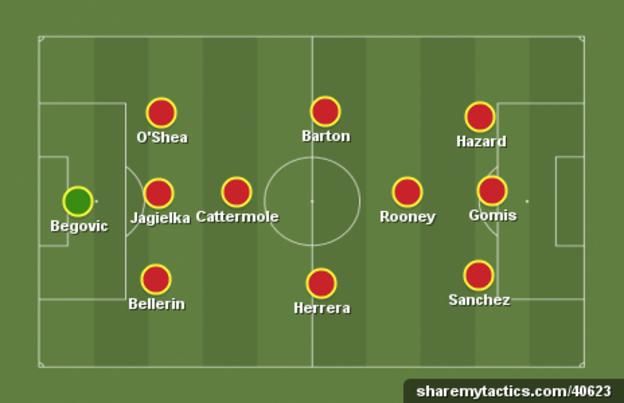 There were some potentially pivotal results in the Premier League this weekend with leaders Chelsea, Arsenal and Manchester United all firming up their positions in the top four.

And down at the bottom there were also some big wins that have dramatically tightened up the fight to avoid relegation.

Arsenal's 4-1 victory over Liverpool was the stand-out result in terms of the race for a Champions League place with Manchester United's 3-1 win against Aston Villa adding to Liverpool's difficulties in their fading pursuit of a top-four finish.

Leicester's 2-1 win over West Ham and QPR's 4-1 success at West Bromwich Albion have given them fresh hope in their efforts to beat the drop, while Sunderland's 1-0 nervy success over Newcastle gave the Black Cats welcome breathing space.

Here are the players who I thought excelled in my team of the week:

I cannot name my goalkeeper for my TOTW without giving a mention to Tim Howard's two superb first-half saves for Everton against Southampton. However I've had to go for Stoke's Asmir Begovic, who from the first Chelsea attack in Stoke's 2-1 defeat knew it was going to be a long evening for the Potters. Begovic had to be very alert to stop the likes of Eden Hazard and Willian from adding even more goals to the two Chelsea managed. The double save from Juan Cuadrado had Jose Mourinho beating the ground with frustration.

What a goal from the teenager. Arsenal have had some great left-backs in their time but I can't remember Kenny Sansom or Ashley Cole producing such cultured finishing during their time at Highbury. Hector Bellerin's superb finish was the start of Liverpool's torturous afternoon, as they were beaten 4-1. He may have given away the penalty for a foul on Raheem Sterling but the youngster appears very comfortable in this star-spangled Arsenal side and quite capable of filling some very big shoes.

This performance by Sunderland against Newcastle at the Stadium of Light was almost unrecognisable from the one that saw the Black Cats lose so badly at home to Aston Villa. At the heart of both games was John O'Shea who was at his commanding best against Newcastle. If Dick Advocaat can inspire such clear emotion in Jermain Defoe, who scored the winner against Newcastle, and such desire in his captain, then Sunderland look odds-on to retain their Premier League status.

Everton have had a difficult season, largely because of the impact of the Europa League. I also get the feeling that a belated return to form of three of their most important players, Tim Howard, Leighton Baines and Phil Jagielka, after an intense World Cup campaign has been crucial to their recent run of games. Jagielka's performance for England versus Italy in midweek was impressive, and his contribution for Everton was just as important in a 1-0 win over Southampton as part of a defence that has returned to keeping clean sheets, and Jagielka is getting his share of goals again.

This was one of the most keenly contested North East derbies I've seen for some time. I could have selected any member of the Sunderland back five in my TOTW such was their commitment in their battle to secure all the points. However, one of the stand-out players in the heart of Sunderland's midfield was Lee Cattermole. It was his continuing interventions that provided the Wearsiders with the impetus and the bite to keep Newcastle at bay. A battling performance if ever I saw one.

This was a game QPR had to win and they needed a cool-headed Joey Barton back in the heart of their team to do it. The tackle on Saido Berahino, followed by an even better challenge on Darren Fletcher, which led to the corner from which Charlie Austin scored QPR's second goal, told you all you needed to know about where the captain's intentions were. Barton was then felled by Youssouf Mulumbu in a way that might have seen other players leave the field, only to recover and put the game beyond the Baggies with a well-taken finish himself. If QPR can keep Barton out of trouble and focused on the task in hand, he can lead QPR to safety.

This is another player who is slowly finding his feet at Old Trafford. It's not been an easy transition for the Spaniard but the two goals he scored against an outclassed Aston Villa will go a long way to giving him the confidence he needs to continue pushing United for that crucial top-four place.

What a goal by the Manchester United captain against Aston Villa and a testimony to his desire and commitment to his club and country. Let us not forget that this has been a period where Wayne Rooney has led England, having played a starring role against Lithuania and Italy, prior to returning home to continue the theme for Manchester United. No sob stories about niggles or fatigue, just a genuine Englishman proud to perform his duty. This lad is an exceptional professional footballer and a throwback to the days when footballers played with knocks and tiredness was a symptom of the job, not treated like some ailment.

There was a time when Jose Mourinho was talking about Eden Hazard as the best young player in Europe. Well, based on Hazard's performance against Stoke, the enigmatic Chelsea boss may be right. The Belgian was practically unplayable during a momentous display of individual brilliance. It was only a moment of sheer impertinence by Stoke's Charlie Adam that took the entire attention away from the star of the show and that was undoubtedly Hazard.

Here is a player who is taking complete advantage of the departure of Wilfried Bony to Manchester City and filling the void admirably. He took both his goals in the 3-1 win over Hull extremely well but I have to say without the appalling decision by referee Andre Marriner to send the Tigers' David Meyler off for what appeared to be a run-of-the-mill tackle, the outcome for Bafetimbi Gomis and for Swansea might have been very different. But we can't blame Gomis for that.

The Chilean just blew Liverpool away. Once again Alexis Sanchez produced some blistering football in a 90-minute display by Arsenal that must have left Tottenham fans very concerned about a possible League and cup double by their north London rivals. Can you imagine? It's enough to make you want to cry!