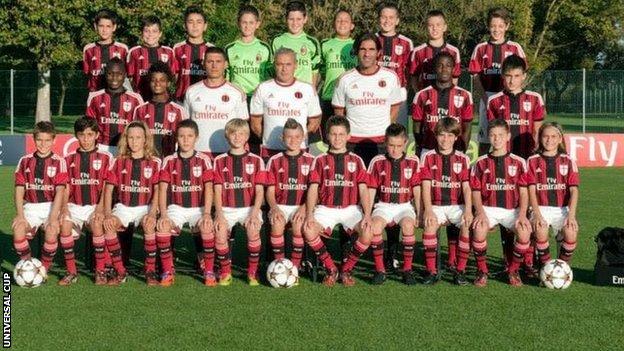 Black players from AC Milan's under-10 team allegedly suffered racist abuse at a tournament in Italy on Sunday, say the club.

The incidents were said to have happened during the 4-0 win over Paris St-Germain which saw them reach the Universal Cup semi-finals.

"There was alleged incidents of racism from certain 'people' in the stands towards Milan's black players," said a statement on the club website.

The Milan statement continued: "We do not wish to magnify the issue, but truly hope that these reports aren't true or that it was simply a sporadic incident.

"If they were to be confirmed, then it would be simply unacceptable."

Chelsea, Ajax, Inter Milan, Roma and Juventus are among the other teams taking part in the tournament in northern Tuscany.

The organisers have been contacted by BBC Sport, but have yet to respond. They have posted an anti-racism video message on their Facebook page since the alleged incidents took place.