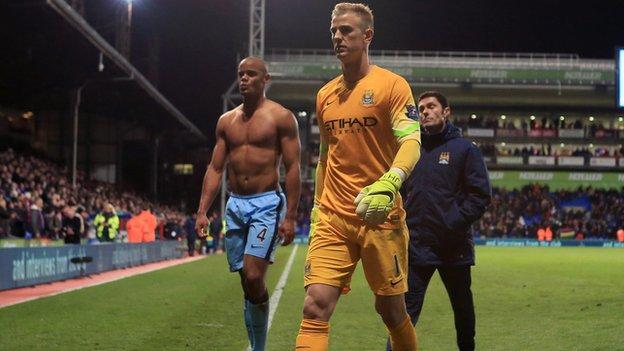 Vincent Kompany says it is a good time for Manchester City to play local rivals United, despite being overtaken by Louis van Gaal's side in the table.

Before Sunday's meeting, the City skipper said: "It's a good moment to go into a derby.

"It's the perfect place for us to go and try to rectify what we've had."

He added: "A derby is a derby. It doesn't matter what place you are in the league, it's a derby."

Following Monday's 2-1 defeat at Crystal Palace, Manuel Pellegrini's side are fourth, a point behind United and two points behind second-placed Arsenal. Before the weekend, City had been second.

They are now 66-1 for the title, with the gap to leaders Chelsea, who have a game in hand over their rivals, now nine points.

Despite the huge setback to their hopes of retaining the title, Kompany said it was important for City to get back on to the winning trail.

"My only concern is we get back to our best form," he said.

"I think it's our general form that we have to improve. I've learnt from the past seasons as well that finishing a season strongly can have an impact on your next season as well."

Former Manchester City goalkeeper Joe Corrigan believes some players in the City squad are not fully committed to the cause.

"A manager can tell the team what he wants on pitch, but it's the players who go out and it's their pride at stake," he told BBC Radio 5 live.

"Not all players, but there doesn't seem to be the passion to go out and win."