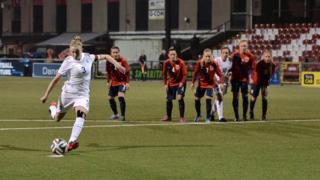 Leah Williamson scores the penalty that sees England's women through to the U19s European Championships, after a five-day wait.

Europe's football governing body Uefa ruled that the final few minutes of England's match with Norway should be replayed after a refereeing mistake in Saturday's first game.

Williamson's kick gave England a 2-2 draw and the point needed for qualification. This comes five days after the referee had awarded a free-kick for encroaching at Williamson's original penalty and wrongly denied her the chance to re-take it.