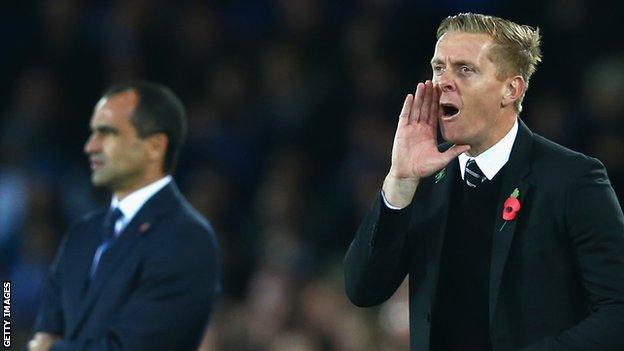 Martinez - whose side come to the Liberty Stadium on Saturday - took charge of the Swans in February 2007, leading them to the League One title in 2008 before joining Wigan in 2009.

"I think it was a huge risk when you think about it," said Monk.

Martinez and Monk played together for Swansea and both captained the Welsh club before being handed the Liberty Stadium hot seat.

"What Roberto did was to pave the way for someone like myself to get that opportunity," said Monk.

"The club has a philosophy itself in terms of they want to have a possession base and they want to see nice attacking football.

"I think each manager's had their own ways but they've tweaked... certain elements.

"I've tweaked it myself a little bit differently and added my own personal beliefs and stamp onto our game."

The pair will come face to face again on Saturday as Swansea host the Toffees in the Premier League, who are nine points and four places below the Welsh club.

Monk, meanwhile, is hoping to create history in his first full season in charge of the Swans.

City are currently one place above their highest Premier League finish, which is ninth, while two more points will see them eclipse their previous highest tally of 47.

Despite his good start in his new role Monk is taking nothing for granted.

"At this moment in time it's been good for me, but football really changes very quickly," he said.

"I think probably the key recipe is they [the board] brought in people who are young and hungry trying to prove a point.

"I think that's crucial. That's what the club does anyway."