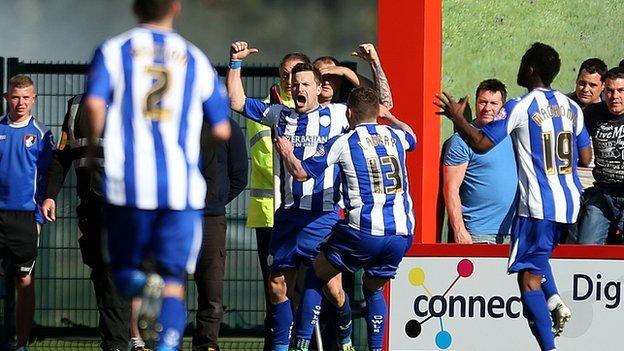 Bournemouth missed the chance to return to the top of the Championship as Sheffield Wednesday equalised with a stoppage-time penalty.

Kieran Lee headed the visitors in front but Yann Kermorgant levelled with a deft header from Matt Ritchie's centre.

After Cherries' Simon Francis saw red for a second booking, Ritchie looked to have won it with a 25-yard screamer.

But when Adam Smith brought down Atdhe Nuhiu with time running out, Chris Maguire made no mistake from 12 yards.

It means Eddie Howe's side remain second in the Championship - overtaking Middlesbrough on goal difference but slipping behind Watford who beat Birmingham 1-0.

Crucially, that goal difference - 15 better than Boro's - means that barring an unlikely scoring spree from the Teesside club, Bournemouth can still clinch promotion by winning their two remaining games against Bolton and Charlton.

If the result felt cruel from Bournemouth's perspective, it reflected the endeavour of a mid-table Wednesday side, ostensibly with nothing to play for, who never gave up during a pulsating game.

The Owls lost two players to injury before 14 minutes had elapsed as keeper Keiren Westwood failed to reappear after the warm-up and was replaced by Chris Kirkland, while midfielder Sam Hutchinson limped off with an apparent hamstring strain.

Indeed, the Wednesday physio was busier than either keeper early on as Kamil Zayatte needed lengthy treatment after heading Maguire's corner wide - and was withdrawn at the interval.

The visitors took the lead when Lewis Buxton - who had two loan spells at Bournemouth more than a decade ago - delivered a deep, hanging cross and Lee was allowed to pick his spot with an inch-perfect header across goal.

For all Bournemouth's pedigree as the country's top scorers, it took that goal for them to kick into gear as Harry Arter's fierce drive from distance was tipped over by Kirkland.

Wednesday nearly made it 2-0 when the impressive Maguire curled a free-kick against the post and Caolan Lavery could only spoon the rebound over the bar.

Kermorgant equalised with 21 minutes left but Francis received a second caution for clipping Maguire as Bournemouth were reduced to 10 men.

However, when the Cherries were awarded a free-kick 25 yards out, Andrew Surman tapped the ball to Ritchie to fire an unstoppable left-foot rocket into the top corner.

Referee Paul Tierney had earlier waved away two Bournemouth penalty claims, but the Lancashire official had no hesitation in pointing to the spot when he adjudged that Smith had impeded fellow substitute Nuhiu.

Bournemouth boss Eddie Howe: "That really is tough to take. That is the reason why we love the game, with its drama and twists and turns even in one game. It was a heartbreaking end to the game for us.

"Even though we have had the most successful season in the club's history, we have had many moments when we have felt low and down and we have to respond to adversity."

Sheffield Wednesday manager Stuart Gray: "We knew it was going to be difficult coming here because their tails are up. When we went 2-1 down, I was thinking that we didn't deserve that as my players were giving everything.

"We thought maybe it wasn't going to be our day but we kept going until the final whistle. I thought if I left this building without anything I would have been very disappointed."