Bristol City secured the League One title with two games left, despite being held at home by Coventry City.

The Robins beat Bradford 6-0 to win promotion on Tuesday, but Coventry edged the first half at Ashton Gate, with Frank Fielding denying John Fleck.

At the other end, Kieran Agard had a penalty appeal turned down after Reda Johnson's challenge.

Luke Freeman wasted Bristol City's best chance after the break, but a draw was enough to confirm them as champions.

In sealing the League One title, the Robins became just the second team to win both the third-tier championship and Football League Trophy in the same season, following Birmingham City's success 20 years ago. 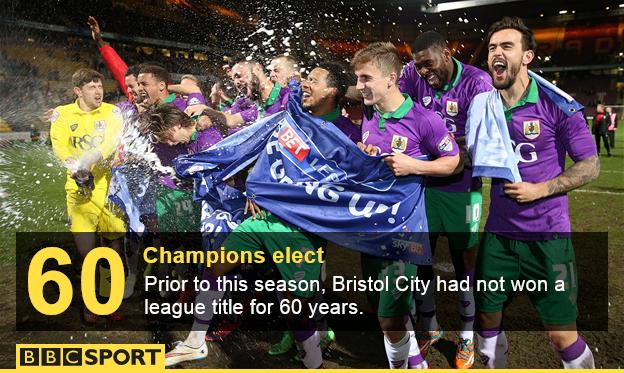 The Robins failed to replicate the impressive attacking display they produced at Valley Parade, with Frank Nouble and Grant Ward both going close to putting Coventry ahead.

In the second half, goalkeeper Fielding produced a brilliant save to keep Nick Proschwitz's chip out as the Sky Blues, who are now five points clear of the relegation zone in 16th, pressed for a winner.

But, with second-placed Preston North End having been held to a draw by Port Vale on Friday, a point was all Bristol City needed to be crowned champions.

"It was a great team effort from everybody. We've been pretty good away from home over the past few weeks so it should be no surprise.

"The lads are a bit disappointed that we didn't nick the game, but we're happy with a point away at the best team in the league."