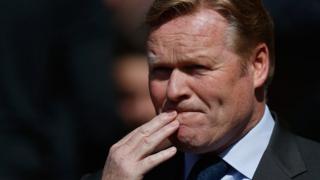 The Dutchman felt the hosts were "very nervous" in the first half, but showed "good character" in the second period.