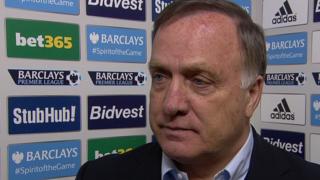 Sunderland head coach Dick Advocaat says he told his players to "look in the mirror and then move on" following their 4-1 defeat to Crystal Palace.

Glenn Murray put the Eagles ahead, before Yannick Bolasie scored a hat-trick to confirm defeat for the relegation-threatened Black Cats.

Connor Wickham volleyed in a late consolation, but it didn't change the result which leaves Sunderland 16th in the table, only three points above QPR and Burnley.