Aston Villa will meet Arsenal in the FA Cup final after a thoroughly deserved win over a desperately disappointing Liverpool at Wembley.

Villa's win was a triumph for manager Tim Sherwood as his side produced a performance of style, composure and grit to come from behind and reach their first FA Cup final since their loss to Chelsea in 2000.

As a consequence there will be no dream finale to his Liverpool career for Steven Gerrard. The Reds skipper, who will join Major League Soccer side LA Galaxy in the summer, was hoping to make a final appearance for the club in an FA Cup final scheduled to take place on 30 May, his 35th birthday.

Philippe Coutinho clipped Liverpool into the lead but the dangerous Christian Benteke levelled before half-time and Villa scored the winner their display fully merited through Fabian Delph's cool finish nine minutes after the break.

Lethargic Liverpool mounted a rally of sorts late on when Kieran Richardson cleared off the line from Liverpool captain Gerrard and half-time substitute Mario Balotelli was dubiously ruled offside when he had the ball in the net.

Villa, however, were not to be denied and the final whistle sparked scenes of joy among players and supporters alike.

The normally animated Sherwood had been calm on the touchline throughout but all his emotions poured out as he celebrated another trip to Wembley on 30 May, on top of moving Villa towards Premier League safety. The ex-Spurs manager, who replaced sacked Paul Lambert in February, has overseen a superb rejuvenation at Villa Park.

Villa had giants all over the pitch, particularly in the shape of Benteke and the gifted 19-year-old Jack Grealish, who played with a calm that belied his years in this hothouse atmosphere.

Liverpool, in contrast, were dismal and once again failed to deliver when the big occasion demanded - which will be a matter of great concern to manager Brendan Rodgers. 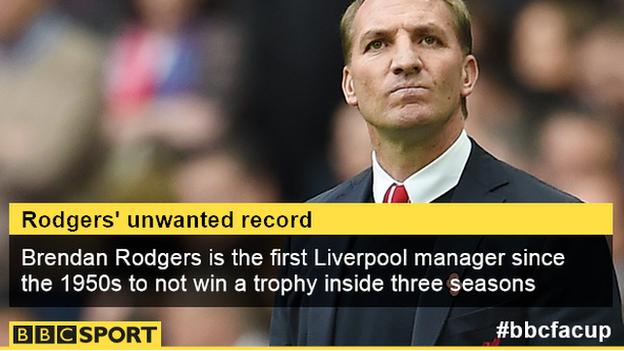 Villa were bristling and business-like whereas Liverpool were timid with little seen of Raheem Sterling, who let the occasion pass him by.

Gerrard was recalled, as expected, but his influence was virtually non-existent in a first half where Villa were the more relaxed and confident side, exemplified by the strolling composure of Grealish and the power of Benteke.

Villa were forced into a change when injured centre-half Nathan Baker was replaced by Jores Okore and, while they were adjusting, Liverpool took the lead against the run of play after 30 minutes. Okore's touch was uncertain and when some order emerged from the penalty box chaos Coutinho provided a calm finish past Shay Given.

Liverpool's lead lasted only six minutes and Villa's equaliser came from a predictable source as Benteke sidefooted past his fellow Belgian Simon Mignolet after the industrious Delph worked an exchange with Grealish.

The concerns of Rodgers had been underlined by an early change from a back three to a four and there were more adjustments at half-time as Mario Balotelli replaced Lazar Markovic and Gerrard was dropped into a deeper role.

Villa simply continued as they were and were ahead 11 minutes after the restart when Grealish was again involved, setting up Delph to finish despite the despairing lunges of Dejan Lovren and Mignolet.

Liverpool just about mounted a gallop as time ran out - but this was Villa's day and deservedly so.