New Yeovil Town boss Paul Sturrock says it is "vitally important" to use the rest of this season to assess his squad after their relegation to League Two.

The Glovers were held to a 1-1 draw by Notts County on Saturday, a result which confirmed their fate with four League One matches remaining.

"Everybody in the squad, near enough, will be given an opportunity so it's up to them," Sturrock told BBC Somerset.

"The quicker I know which ones don't want to jump off the sinking ship and which ones I don't think I need for next season the better. I can only do that by looking at them in game conditions."

The 58-year-old Scot was appointed last week after Terry Skiverton had overseen just two wins in 13 matches during a spell as acting manager, which followed Gary Johnson's departure at the start of February. 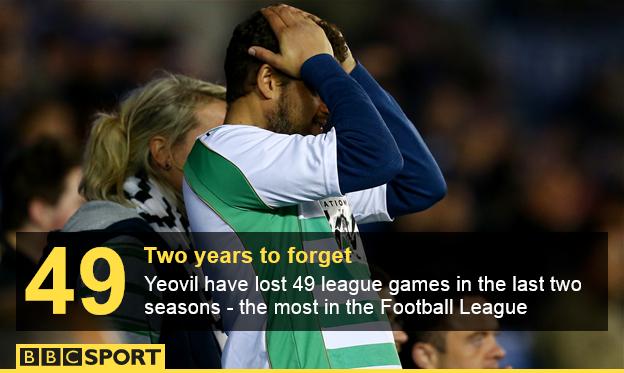 Going into Saturday's game against the Magpies, the former Plymouth and Southend boss's first in charge, the Glovers were already 14 points from safety and all-but relegated.

Now 10 points adrift of 23rd-placed Colchester, who also have a game in hand, Yeovil also look likely to suffer the ignominy of finishing bottom of their division for the second campaign in a row.

"It's always difficult when you're lacking confidence and shipping goals like we've been to all of a sudden come out and play free-flowing football and look a really good side," said Sturrock. "That's going to take work and time.

"I will hopefully map out my thoughts on how we're going to go forward.

"And going forward means we have to be positive in our approach and make sure we have the players in situ for the challenge of next year."