Cardiff chairman Mehmet Dalman says they will "enhance engagement" with fans after the Supporters Trust called on the club to reveal its future plans.

The Trust is concerned by recent player departures and dwindling crowds.

It also fears "without a blueprint for the future loyal fans... will just stop coming to games".

Dalman said: "We recognise the importance of constructive dialogue and listening to fans views on ways in which we can take the club forward."

The Bluebirds' chairman added: "We will continue to enhance engagement levels with all Cardiff City supporters over the summer and next season."

Top scorer Kenwyne Jones was among players loaned out recently, while the Trust is also worried attendances could "dwindle further next season."

"I also agree that the chance to succeed can only improve if we are all pulling together and supporting the team in numbers," said Dalman.

"I can assure all Cardiff City fans that the club is fully committed to delivering sustainable and long term success, both on and off the field of play.

"Cardiff City has strengthened its relationship with official supporter groups over the last twelve months, having held open and productive discussions on a number of issues, including the return to traditional colours in January this year.

"During that time I have personally invited representatives of the Supporters Club and Supporters Trust to present to the board ahead of our meetings and both will receive the same invitation ahead of the next scheduled meeting."

Attendances have fallen sharply at the Cardiff City Stadium since the Bluebirds were relegated to the Championship at the end of the 2013-14 season.

The average league crowd is 20,945 with two home matches left, compared to 27,430 for their debut season in the Premier League.

Cardiff City Stadium's new £12m Ninian Stand extension, built less than a year ago, will be temporarily closed for club matches next season, due to poor season ticket sales.

After winning 2-1 at Leeds United on Saturday Cardiff sit 12th in the table with no prospect of promotion or relegation with four matches remaining.

Ahead of that win, former Wales and Cardiff captain Kevin Ratcliffe said he feared they could be relegated at the end of 2015-16 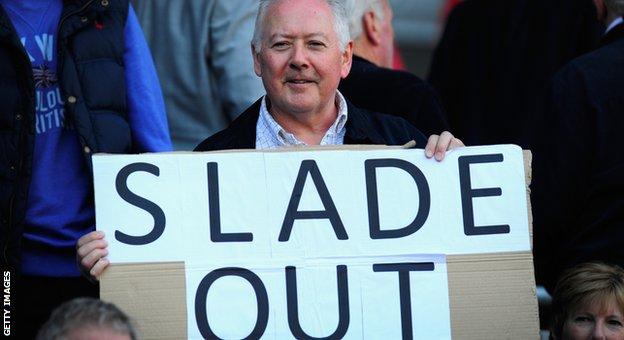 The Trust says: "Fans have told us they are concerned about the quality of football this season."

In recent matches some fans have called for manager Russell Slade to go and chants of "you don't know what you're doing" were directed at him by some supporters during the recent 3-0 home loss against Bolton.

Defender Matthew Connolly joined Watford until the end of the season in March as Slade continued to cut down the wage bill.

The former Leyton Orient boss admitted in April that some of the highest earners at the club may be among those to leave at the end of the season.

The Trust's statement adds: "We fully appreciate the need for the club to operate on a more sustainable footing in the future following heavy investment by the owner, Vincent Tan, in recent years.

"But, as fans we deserve a detailed explanation on the way forward for our club - a vision on where Cardiff City will be in a year, three years and five years.

"The club needs to be open and state clearly what its ideas are for rebuilding.

"Are there plans, for instance, to dispose of more of our more high profile players in the run-up to the new season?"