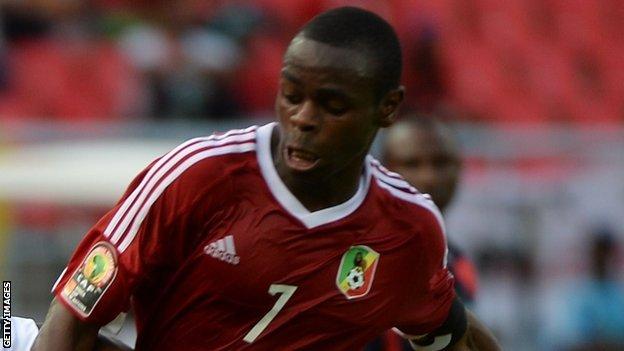 Congo midfielder Prince Oniangue says the future looks bleak for the national team unless the country's football authorities "get their acts together".

At the 2015 Africa Cup of Nations, Congo reached the quarter-finals for the first time since 1992.

Oniangue told BBC Sport: "After that success we need to progress and not take several steps backward.

"The federation has to work with the ministry, the coaches and the players so we can all progress as a unit."

Congo enjoyed their heyday in the 1970s, winning the trophy in 1972 with a 3-2 victory over Mali in the final, and reaching the semi-finals two years later where they lost in extra-time to Zambia.

Of course we want to qualify for Afcon 2017 but you cannot achieve this without a solid foundation and professionalism in place, which we currently lack

But a barren spell since then had seen them go without a Nations Cup finals victory since 1974 until the 26-year-old Oniangue scored the winner against Gabon in Equatorial Guinea this year.

Oniangue does not want a return to those dark days and has called for Congolese football's administrative issues to be resolved before qualifiers start for the next edition of the tournament.

To book a place at Gabon 2017, Congo must negotiate a group that contains Zambia Kenya and Guinea Bissau and Oniangue is worried that the team will not receive the support it requires to achieve the results they need.

"Everyone wants to progress but before you can do that you need to have a solid foundation," he said. "At the moment in Congo we have nothing on ground. We were meant to play some friendly games in March but the national team didn't play." he said.

"We're in a tough qualifying group. We only know Zambia from the last tournament but we know nothing about Kenya and Guinea Bissau.

"Our coaching staff needs to put us in the right condition for us to achieve our objective [qualification].

"People expect us to keep the momentum and improve on our performance from the last Nations Cup but everything is disorganised right now."

Oniangue, who plays his club football in France for Reims, is clear about the areas he feels must be addressed but fears those in administrative control do not have the team's best interest at heart.

"I can't confidently tell you right now that we can qualify," he added. "We need to put in place the basic needs of the players, make a proper plan, get ourselves organised and roles are clearly defined so we can all focus only on the football as professionals.

"If these things are in place then I can have have a clear vision of our chances. Of course we want to qualify but you cannot achieve this without a solid foundation and professionalism in place, which we currently lack."