The League One leaders secured their spot in the Championship with three games still to play, having come down from the second tier two seasons ago.

"To get promoted in this manner, wow," Pack, 24, told BBC Radio Bristol.

"A team were due that against us, a battering, but what a way to do it and what a game to do it in."

Steve Cotterill's side, whose victory at Valley Parade was the club's biggest since 2006, now need only one more win to secure the League One title.

City have topped the table for 28 out of 36 weeks of this season, having gone 16 matches undefeated at the beginning of the campaign, while their latest 12-game unbeaten run has taken them to promotion with three games to spare.

"To go through the season we've had - to win the Johnstone's Paint Trophy and gain promotion - some players go through a 10-year career and never get anywhere near that," added Pack.

"For a lot of our boys to do that at such a young age is fantastic."

Former Cheltenham, Burnley and Portsmouth boss Cotterill, who replaced Sean O'Driscoll as manager in December 2013, said their success this season was "hopefully the start of something big" for the club. 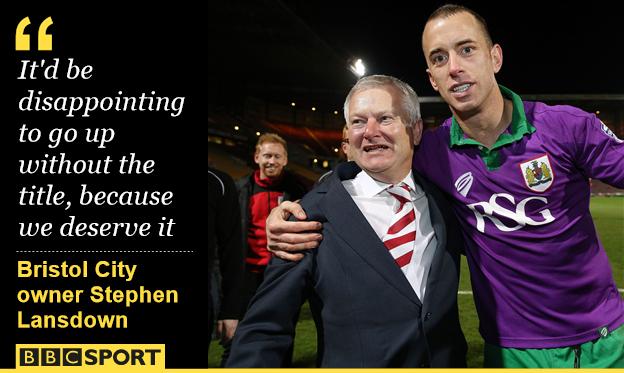 When the 50-year-old first arrived at Ashton Gate, the Robins were 23rd in League One and in danger of suffering successive relegations, but he has since overseen a significant turnaround, winning 47 of his 85 games in charge so far.

"I said a while ago that I thought we had something special going on and we're all really pleased with how this season has panned out for us," said Cotterill.

"It's been really, really enjoyable. I've enjoyed the players' company, I've enjoyed coaching them and the supporters have been magnificent too.

"We're going to go to some good clubs in the Championship next season and if we can replicate our football a level up that'd be great."