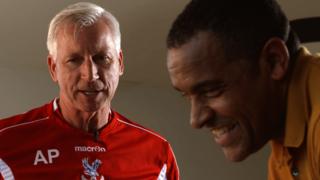 Both men scored in the match, with Palace going on to win the dramatic clash 4-3.

Pardew, now Eagles manager, made a name for himself by heading home the winner in extra time.

He admits to Bright he was "nervous" before the tie, but confident Palace could give Liverpool a good game.

Watch the full interview on Football Focus live from Wembley, 12:10 BST on Saturday, 18 April on BBC One and on the BBC Sport website.