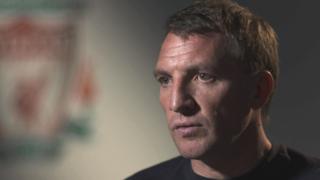 The 20-year-old England international was pictured in a national newspaper inhaling laughing gas and smoking a shisha pipe, and Rodgers says he has reminded the Liverpool forward of his responsibilities as a role model.

The incident involving Sterling came only a week after the Jamaica-born forward admitted rejecting a new £100,000-a-week Liverpool contract in an interview with the BBC.

But he scored against Newcastle on Monday and is expected to play in Liverpool's FA Cup semi-final against Aston Villa at Wembley on Sunday.

Watch the full interview on Football Focus, live from Wembley, at 12:10 BST on Saturday, 18 April on BBC One (not in Scotland) and on the BBC Sport website.