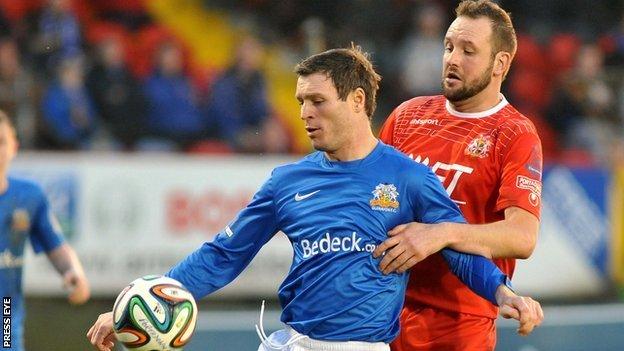 Glenavon hope to extend their six-match Premiership winning streak as they continue their bid to secure a Europa League place against rivals Portadown.

The third-placed Lurgan Blues are two points ahead of the Ports with two games remaining, while Cliftonville are also in contention for a European spot.

A prize of more than £140,000 is at stake for European qualification.

Crusaders will aim to make their first league title since 1997 a mathematical certainty against Glentoran at Seaview.

The Crues' victory over Cliftonville last week, allied with Linfield's defeat by Glenavon, moved Stephen Baxter's side nine points clear of the Blues, with three fixtures to play and a much superior goal difference.

Skipper Colin Coates returns after suspension as the north Belfast side continue their celebrations at their home ground, although the Gibson Cup will not be presented until the final day of the season.

Crusaders have won 13, drawn one and lost one of their last 15 Premiership outings.

Linfield manager Warren Feeney has demanded improvement from his players for the trip to face Cliftonville, after what he believes was their worst performance of the season last week.

The Blues are assured of European football in the summer while the Reds need to win and hope that other results go their way if they are to stay in the hunt for a Europa League place.

In the bottom half of the table, relegated Institute go to Dungannon Swifts in the hope of clinching a first league point since February and a first victory since October.

'Stute manager Paul Kee will sit down with Board members in the next few weeks to discuss the future at the Drumahoe club.

Ballymena United entertain Ballinamallard United at the Showgrounds, with both clubs defending their record of having won their first three post-split fixtures.

"We have built up a bit of momentum and it's good to finish the season off with a couple of matches in front of our home fans. We've been shuffling the squad to give each of the players some game time and that will probably continue," said Ballymena manager Glenn Ferguson.

"We set ourselves a target of not losing any of our last five games and we would like to remain unbeaten. It would be a good positive way to end the season," commented Mallards boss Whitey Anderson.

Coleraine have lost four matches in a row ahead of their home fixture against Warrenpoint Town, who will occupy the play-off position.

Given the financial limitations at the club, Bannsiders manager Oran Kearney has taken the opportunity to field some of his younger squad members in recent weeks.

"These young lads represent the future of the club but we still want to win some games, score some goals and pick up a few points," said Kearney.