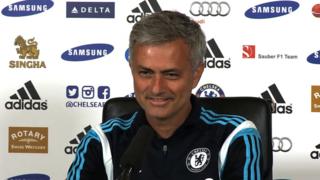 Chelsea manager Jose Mourinho says games against Manchester United are "easy" because his players need no extra motivation to perform.

The Blues take on the Red Devils at Stamford Bridge on Saturday, looking to extend the eight-point gap between the two sides and take a step closer to their first Premier League title since 2010.

Mourinho also says that his team receive the most social media abuse because they are "boring". Anti-discrimination group Kick It Out said that of 130,000 abusive Premier League posts on social media this term, Chelsea had more than any other club.