Rotherham increased their Championship survival hopes with a late equaliser against 10-man Norwich, whose automatic promotion hopes are still intact.

City's Lewis Grabban was sent off in the 25th minute after appearing to throw a punch at Craig Morgan.

But Gary Hooper fired a 25-yard shot into the top-right corner on 56 minutes to put the visitors ahead.

With Middlesbrough losing at Fulham and Bournemouth not playing until Monday, the point for Alex Neil's Norwich side sees them stay fourth, a point behind the second-placed Cherries and Middlesbrough, in third.

The Millers, who were docked the points for fielding an ineligible player, remain a point clear of 22nd-placed Millwall, who let a two-goal lead slip to draw with Derby.

Backed by 2,300 travelling fans, a bright opening from the visitors saw Nathan Redmond's 25-yard shot comfortably saved by home goalkeeper Emiliano Martinez before the game's major talking point midway through the half.

Former Bournemouth player Grabban appeared to throw a punch at Morgan and was shown a straight red card by referee Mark Brown.

Shortly after the Canaries were reduced to 10 men, Rotherham's Danny Ward wasted the best chance of the half when he sliced Matt Derbyshire's cross inches wide.

Rotherham started the second half on top, with Ward and Derbyshire both going close, before Norwich substitute Hooper took the ball on the edge of the box and smashed an unstoppable shot past Martinez.

However, the hosts eventually made their man advantage count when Bowery headed Hammill's accurate cross into the bottom corner.

"It was a stunning performance, as soon as we changed the system after they dominated the opening 10 minutes the game changed.

"We sit here and go away frustrated, we counted five simple, simple chances that we missed."

"We have got to take care of ourselves. If Bournemouth win the game fair play, they will deserve to be where they are.

"It won't be difficult to lift ourselves, it looks as if we will be ending up in the play-offs, we want to win against Fulham and take that momentum into the play-offs. We want to put some wrongs right. 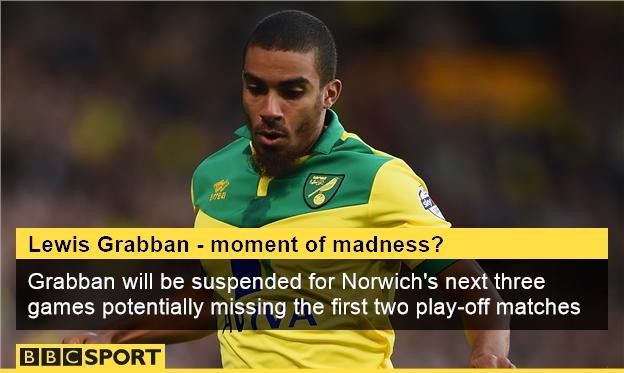