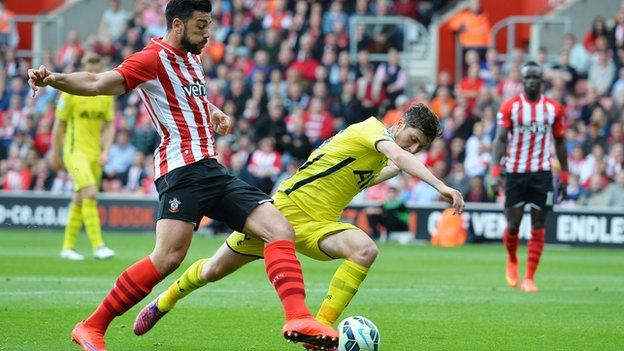 Tottenham twice came from behind to earn a valuable point at Southampton in the battle to secure European football.

Graziano Pelle gave the hosts the lead after seizing on a defensive lapse to prod home before Erik Lamela diverted the ball home via his arm for 1-1.

Pelle again put the Saints in front with a powerful header, but their lead lasted just five minutes.

Nacer Chadli latched on to Eric Dier's through ball and converted from close range to secure a point.

The result means Spurs remain sixth, a point ahead of Saints and level with fifth-placed Liverpool, who have a game in hand.

Southampton fans renamed the match Ronald Koeman Day in support of their Dutch manager and arrived at the game dressed in orange as former boss Mauricio Pochettino made his first return to St Mary's since his acrimonious departure to Spurs last summer.

Morgan Schneiderlin forced Tottenham keeper Hugo Lloris into the first save of the game before the opener arrived in the 30th minute.

Sadio Mane did the damage, splitting the Spurs defence with a searing run into the box and, with the ball at his feet and facing his own goal, Spurs left-back Ben Davies hesitated and Pelle nipped in to prod home from close range.

St Mary's was stunned into silence before the break with Lamela appearing to deflect the ball into the net with his arm as he attempted a header from Dier's cross for the equaliser.

Steven Davis and Ryan Bertrand both had chances to give Saints the lead before Pelle got his second of the game with a superb header from Shane Long's cross which powered past Lloris.

But Chadli equalised after escaping his marker and latching onto Dier's ball before holding off the challenge of Maya Yoshida to side-foot across Kelvin Davis from close range to seal a point.

"I am a little bit disappointed only to draw, but it was a very good performance in a fantastic football game between two attacking teams.

"I enjoyed it very much and I am proud of my side. We created a little bit more than them and played at a good level, but it is difficult to beat Tottenham."

Tottenham manager Mauricio Pochettino, on his first return to St Mary's to face his former club:

"I want to thank the Spurs fans because they were fantastic and I felt their support on the pitch.

"They touched me because they backed me a lot. When they sang my name it was the first time I had heard that from them and I appreciated that so much.

"I was focused on my job but was a very tough and emotional game for me. It was difficult because I still love Southampton and I have very good memories here."