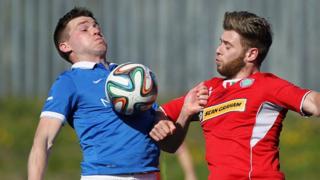 Cliftonville and Linfield in Solitude draw

Linfield see another two points slip away as they draw 2-2 away to Cliftonville.

Michael Carvill and Aaron Burns were on target for the Warren Feeney's second-placed Blues while Cliftonville's top scorer Joe Gormley scored both for the hosts.

Gormley's record for the most goals scored by a Cliftonville player in one season now stands at 41.