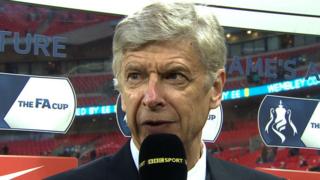 Arsenal manager Arsene Wenger admits his side were surprised by Reading's intensity during the Gunners' 2-1 FA Cup semi-final win at Wembley.

Alexis Sanchez gave the Premier League side a 39th-minute lead from close range before Garath McCleary volleyed home a second-half equaliser, but Reading keeper Adam Federici was at fault as Sanchez's effort spilled through his grasp to give Arsenal the win in extra-time.

The Gunners will play Aston Villa or Liverpool in the final at Wembley on 30 May, as they look to secure a record 12th FA Cup.

Premier League reaction: West Ham up to fifth, Fulham out of bottom three

'Project Big Picture is toxic, but major change will happen'