Chelsea boss Jose Mourinho said Manchester United's important players were "in our pockets" in a match that went "exactly" as they wanted.

The Blues boss says his side have "almost" won the Premier League title after their 1-0 win at Stamford Bridge moved them 10 points clear at the top.

United dominated possession and had more chances than the league leaders.

Mourinho said: "We prepared for it to be like this. It was the game we wanted and expected."

Chelsea will be champions if they win at Arsenal and Leicester in their next two matches, having beaten third-placed United with a first-half goal from Eden Hazard. 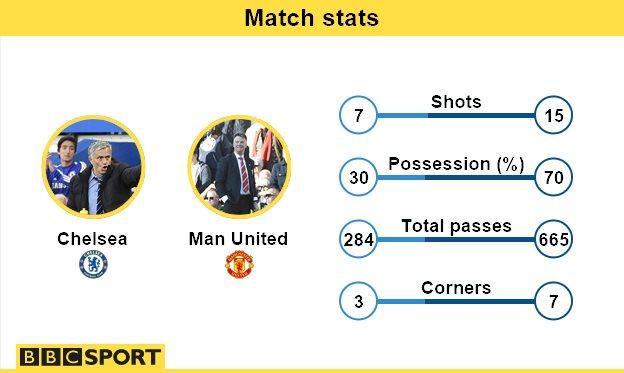 Visiting manager Louis van Gaal said it was his side's "best display of the season" but Mourinho insists it was part of the game plan.

"It was difficult, but less than you think," he said. "Control their direct football to Marouane Fellaini and control the wingers from making crosses on the inside foot.

"When we know Wayne Rooney plays in midfield, we control his progression into the box. Control set-pieces and don't give away direct free-kicks as they have three specialists.

"Wait for a mistake and score a goal. We were able to make their important players disappear. Nobody saw them. They were in our pockets."

United went into the match knowing they needed to win for the first time in five league visits to Chelsea to have any realistic hope of winning the title.

But, despite big celebrations at the end of the match, Mourinho was careful to point out his side are not champions yet.

"We are not celebrating," he said. "Football is not about 'ifs' and 'almosts', it is about mathematics. When it is done, it is done, and until that moment we don't celebrate.

"I feel we are almost there but there are no 'almosts' in football."