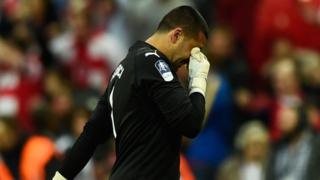 Reading goalkeeper Adam Federici is "inconsolable" after his error in extra time handed a 2-1 victory to Arsenal in the FA Cup semi final.

Sanchez gave the Premier League side a 39th-minute lead from close range before Garath McCleary volleyed home an equaliser shortly after the break.

Reading needed the post and keeper Adam Federici to keep the scores level as the game required an extra 30 minutes to decide the outcome.

But the Australian keeper was at fault as Sanchez's effort spilled through his grasp and rolled in and although Reading pushed for an equaliser, Arsenal held on.

The Gunners will now face the winners of Sunday's other semi-final between Aston Villa and Liverpool (15:00 BST kick-off) as they look to lift a record 12th FA Cup.