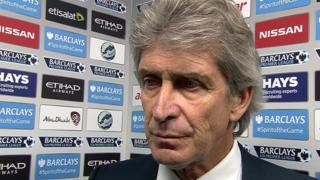 Manchester City boss Manuel Pellegrini is delighted after his side brushed aside West Ham United 2-0 to bounce back from last weekend's derby defeat at Old Trafford.

James Collins's bizarre own goal and Sergio Aguero's 20th league goal of the season secured the points, but City playmaker David Silva was stretchered off the field with a facial injury after being caught in the face by Cheikhou Kouyate's right elbow.