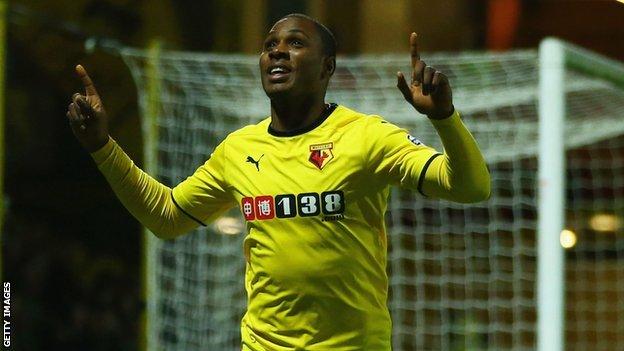 Nigerian striker Odion Ighalo has compared Watford's two remaining Championship games to finals as they close in on the title.

The Hornets top the table by a point with only a trip to Brighton and a home match against Sheffield Wednesday left.

"We are where we want to be but we still need to win our next two finals," the 25-year-old told BBC Sport.

"We have our promotion ticket in our hands and we cannot afford to miss out on making history."

A battling 1-0 win over Birmingham at Vicarage Road on Saturday lifted Watford above Bournemouth, who are second in the table ahead of Middlesbrough on goal difference.

And with the positions very tight, Ighalo insist no-one at Watford is taking anything for granted,

"Right now the attitude is to do the perfect business by winning at Brighton and hopefully complete the job at home on the final day.

"It's all about the strong mentality and I share a dressing room with players who are not getting carried away because we are top of the table."

The club missed out on promotion to the Premier League in 2012/13 season, after losing to Crystal Palace in the Championship play-off final and although Igahlo was not at the club to experience that disappointment he is determined to help ensure it does not happen again.

"As players we know exactly what is ahead of us because any slip could be costly," said Ighalo, who has 16 goals in 10 games in 2015 and is the top scorer in all four professional divisions in England this year.

"When you are two games away from winning the league you don't switch off, so our minds are focussed on what lies ahead."

Born in Lagos, Ighalo joined Norwegian side Lyn Oslo in the summer of 2007 and a return of 10 goals in 23 appearances led to a switch to Italian side Udinese in July 2008.

Apart from a loan spell with Cesena, he played the majority of his football in the past five years for Granada in Spain.

Ighalo helped the Spanish side achieve back-to-back promotions from the third-tier to La Liga between 2009 and 2011 by scoring in two play-off finals.

The Nigeria international initially moved to Watford who, like Udinese and Granada are owned by the Pozzo family, on a season-long loan in July 2014 but four months later agreed a permanent contract until the summer of 2017.

The 25-year-old added: "On a personal level it's been a good season for me because I have scored 20 goals for the first time in my professional career.

"I also made my senior debut for Nigeria and with Watford we are just two games away from completing a fantastic season, I can only thank God for everything."