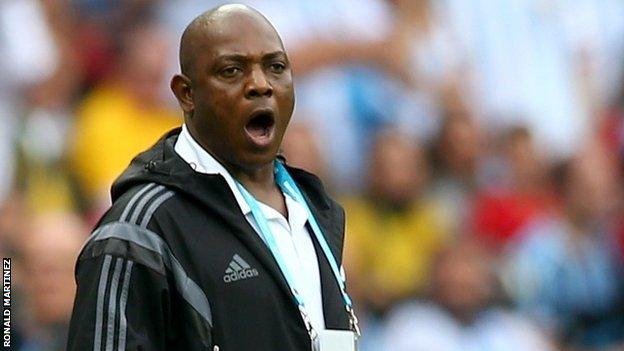 Stephen Keshi has been appointed Nigeria coach for the third time and signed a two-year contract on Tuesday.

In his first spell he won the 2013 Africa Cup of Nations but the deal was not renewed after the 2014 World Cup.

He later returned on a match-by-match deal, which ended in November after failure to reach the 2015 Nations Cup.

"It's a fresh start. We need the support of our fans, media and every Nigerian to return the team to where we truly belong," Keshi told BBC Sport.

"As a coach and former player I was also hurt that we failed to qualify for the last Nations Cup.

I remain confident that this time around we will see an improvement, change in attitude and positive results

"To succeed we all need to come together as one because Nigeria belongs to us - this is not Stephen Keshi's team but our national team."

BBC Sport understands that Keshi has been set several targets and that his contract will be terminated if he does not meet them.

The 53-year-old was also required to sign a code of conduct and is expected to work with the Nigerian Football Federation technical committee.

However, the NFF's technical committee boss Felix Anyansi-Agwu said: "The NFF board is confident Stephen Keshi can take the Super Eagles to new heights.

"We want Nigerians to see this as a new beginning and to support the team and the NFF."

Keshi, who also won the Nations Cup as a player with Nigeria in 1994, declined to comment on the contract details or the exit of his long-term assistant Daniel Amokachi.

Former Nigeria striker Amokachi has left his role with immediate effect and been replaced by Salisu Yusuf.

Yusuf, who led Kano Pillars to the Nigerian title in 2008, has previously worked as assistant to former Nigeria coach Samson Siasia at both senior and U20 levels.

As caretaker coach, Keshi endured a turbulent 2014, in which he was sacked by the NFF and only reinstalled after intervention from Nigeria President Goodluck Jonathan.

His last two home matches in Abuja and Akwa Ibom were marred by a negative reaction from the public and Keshi has pleaded for the home supporters to be positive during the 2017 Nations Cup qualifiers.

The Super Eagles have been drawn in one of the toughest-looking groups, alongside seven-time champions Egypt, Tanzania and Chad.

"I understand we still have some disappointed people out there but our dedicated players deserve our encouragement and support," added Keshi.

"It doesn't matter where they play, these boys always give everything and we need to stand by them and the coaching crew.

"I remain confident that this time around we will see an improvement, change in attitude and positive results."