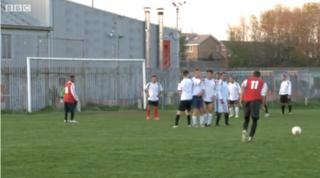 Over the last three months, teams from Cardiff's Congolese, Darfur, Kurdish, Sudanese, Yemeni and Zimbabwean communities have competed in a series of football matches for the chance to play in the Cardiff Community Cohesion Cup final.

After victory over the Kurdish side at Grange Albion, the Yemenis will run out at the Millennium Stadium on Thursday, 30 April, against a team featuring former Cardiff City players Roger Gibbins, Derek Brazil, Jeff Eckhardt, Damon Searle and Jason Fowler, as well as local community police officers.