Rotherham secured their Championship survival with a 2-1 victory over Reading that relegated Wigan and Millwall.

Second-half goals from Matt Derbyshire and Lee Frecklington at the New York Stadium gave the Millers only their second win in nine games.

They are now four points clear of Millwall and six ahead of Wigan with just one round of games to play.

Oliver Norwood pulled one back late on for 19th-placed Reading.

Rotherham had three points deducted last week for fielding an ineligible player, but have still managed to retain their Championship place after taking eight points from their last five matches.

And it has condemned Wigan, who won the FA Cup in 2013, to League One following their second relegation in three seasons.

The Latics will be joined in the third tier by Millwall, whose five-year stay in the Championship has also been ended by Rotherham's victory. 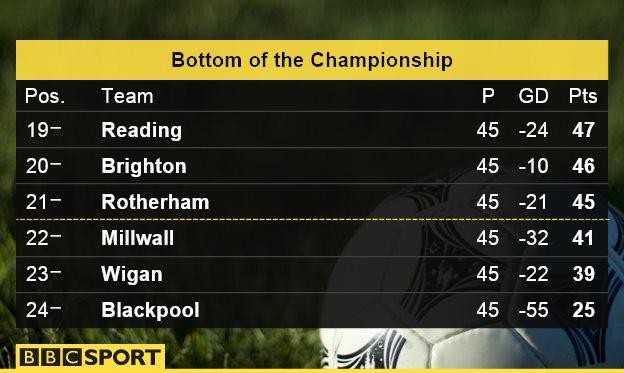 All of the relegation and automatic promotion spots in the second tier have been decided, meaning only two play-off spots are left to play for on Saturday. Ipswich, Derby, Brentford and Wolves all remain in contention.

But Rotherham's win means their trip to Yorkshire rivals Leeds United is now irrelevant. The Millers were in control in the opening half against Reading but were unable to break down a resilient away defence.

The deadlock was eventually broken on 52 minutes when Rotherham top-scorer Derbyshire pounced on a Danny Ward cross from close range for his 10th goal of the season.

That strike calmed home nerves and six minutes later Ward was again the provider with a low cross for Frecklington to prod home at the far post.

Midfielder Norwood ensured a nervy final four minutes for the Millers when he fired home from the edge of the box for only his second goal of the season, but Reading have now lost their last five matches.