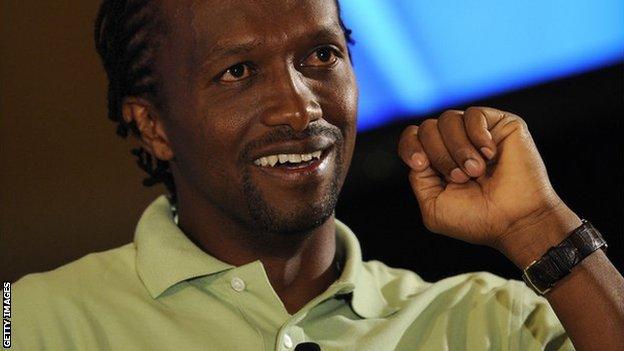 Moshoeu had been suffering from stomach cancer and lost his battle against the disease on Tuesday.

The midfielder won 73 caps and will be particularly remembered for starring in Bafana Bafana's 1996 Africa Cup of Nations-winning team.

Neil Tovey, captain of the 1996 team, told BBC Sport: "It is very, very sad. He was a tremendous footballer - similar to Lionel Messi."

Moshoeu's career began in 1987 with local side Giant Blackpool and he went on to play for eight other teams including Kaizer Chiefs and Turkish giants Fenerbahce.

He first played for South Africa in 1993 - a year after their return from a decades-long ban because of apartheid - and, incredibly, he was still part of the Bafana Bafana team at the 2004 Nations Cup at the age of 38.

Moshoeu carried on playing professionally for four more years before finally hanging up his boots when he was 42.

Tovey added: "He was an extreme athlete, a very balanced footballer. He was nimble and could drop a shoulder to send a whole defence in one direction and he would go in the other direction.

"He is up there as one of the best South African players. And for someone to finish their professional career at the age he did, that says a lot. He lived his life the correct way."

South Africa Football Association president Dr Danny Jordaan said: "Our deepest condolences to his family and friends for their loss, hope they find strength in these difficult times. The passing on of this legend saddens us.

"Shoes was a genius on the field, an intelligent man off it. He was humble and always willing to give advice. He will be remembered for almost single-handedly defeating Ghana in South Africa's path to lifting the 1996 Nations Cup title. We have certainly lost a hero."