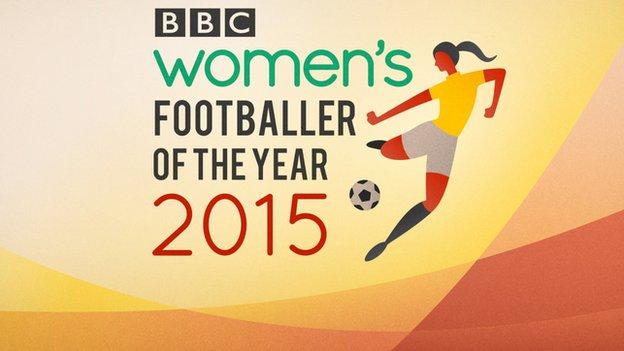 The winner of the BBC Women's Footballer of the Year 2015 will be announced during a live edition of Sport Today on the BBC World Service on 26 May 2015. It will also appear on bbc.com/womensfootball.

The nominations for the 5 player shortlist were drawn up by leading football experts around the world, consisting of women's football journalists, coaches, administrators and former players. The experts were asked to name their top five contenders in order of preference: 5 points for their top player, 4 to second and so on.

They were asked to select their nominations according to the following criteria: technical ability, impact on club and/or country results, consistency, improved level of performance, teamwork, fairplay.

Five women's football journalists from the original expert panel were then asked to narrow down the top ten players to a five player shortlist.

The experts were not paid to take part in the nomination process.

Players are eligible to win the BBC Women's Footballer Award of the Year 2015 if they are eligible to represent a recognised national or club level women's football team.

Once the shortlist is published, the award will be decided by public vote. The public can vote online through the BBC website at bbc.com/womensfootball or by SMS.

The number of online votes will be added to the number of text votes and the final result will be available on the BBC Women's Footballer Award website, along with terms and conditions.

How to vote - SMS

Text 1 for Veronica Boquete, 2 for Nadine Kessler, 3 for Kim Little, 4 for Marta or 5 for Asisat Oshoala.

How to vote - online

By visiting bbc.com/womensfootball. Select the player you want to vote for and submit.

1. This vote is administered by the BBC and the Award meets the requirements of the BBC's code of conduct on competitions & votes, which can be found on www.bbc.co.uk/competitioncode.

2. The winner will receive a trophy and be revealed on air as BBC Women's Footballer of the Year 2015.

3. The shortlist for the BBC Women's Football Award will have been drawn up by a panel of football experts and BBC production staff.

4. The criteria on which the shortlist will have been drawn on includes - Technical ability, Impact on club and/or country results, Consistency, Improved level of performance, Teamwork, Fair play.

5. The shortlist will be put to the public vote via SMS text and through the BBC website at bbc.com/womensfootball. You can vote using either method. SMS votes are limited to one text per caller.

6. The number to text for all contenders will be the same and will be broadcast on-air and published on the website. For each contender, there will be a keyword or number that will need to appear at the beginning of the text votes.

7. In the UK, text messages will be charged at the standard rate of your service provider. Charges for other countries may vary, so please check with your network provider. Please be sure you carefully key-in only the key word or number of the nominee you wish to vote for. Any text message received without a correct keyword will not count as a vote but the message will still be charged. You must obtain the bill payer's permission before voting. There will be no return, bounceback confirmation message as part of the vote.

8. The BBC will only ever use your personal details for the purposes of administering this vote and will not publish them or provide them to anyone without your permission. If you would like to know more about the BBC's privacy policy, please see the BBC Privacy Policy at www.bbc.co.uk/privacy.

13. No ineligible entries will be considered. The BBC reserves the right to disqualify votes if it has reasonable grounds to suspect that fraudulent voting has occurred or if it considers there has been a deliberate attempt to manipulate the result

16. All voting will be overseen by BBC and the result will be independently verified.