Bournemouth look certain to reach the top flight for the first time in their 125-year history after Monday's 3-0 win over Bolton all but completed a remarkable rise from football's abyss to the top of the game.

The seaside club, whose 11,700-capacity Goldsands Stadium will be the smallest in Premier League history, began 2008-09 on minus-17 points in League Two because of administration and now are set to celebrate their place in football's top tier.

Chairman Jeff Mostyn said promotion for a club who were 24 hours from liquidation in 2008 "would be the greatest fairytale since Hans Christian Andersen wrote his last one", but is he right?

BBC Sport takes a look at some of the other clubs to have overcome the odds and whether their experiences give hope to the Cherries next season.

Journey: Swindon Town's 4-3 Wembley win over Leicester in 1993 will go down as one of the most thrilling play-off finals, and marked the Robins' rise from the bottom.

The 1986 Fourth Division champions lost manager Lou Macari to West Ham in 1989. Former Tottenham midfielder Ossie Ardiles came in and, in his first season, they won promotion to the top flight as Second Division play-off winners, but there was a twist in the tale...

They were initially demoted to the Third Division for irregular payments, but partially won an appeal meaning they stayed in the second tier. Under the management of Glenn Hoddle, top-flight football was brought to the County Ground for the first time via the play-offs in 1993.

Outcome: Bournemouth fans will get little confidence from this - it was to be the club's only season in the top flight. With John Gorman replacing Hoddle, they won only five league matches and conceded a record 100 goals. They have since suffered financial problems and became the first former Premier League club to be relegated to the Football League's bottom division in 2006.

They said: "Coming back on the bus after Wembley, down the M4, the bridges were draped in flags, towels, anything that was red and white. You can never tire of remembering those days, they were wonderful times." - Former Swindon defender Paul Bodin

The smallest town in the Premier League club

Journey: Wade Elliott ensured himself legendary status in the claret half of east Lancashire when his 20-yard screamer won Burnley the 2009 play-off final against Sheffield United to end their 33-year top-flight exile.

Burnley spent most of their early history in England's top two divisions, but remained outside the top flight from 1976 to 2009. In 1987 - during a seven-year spell in the lowest tier of the Football League - they narrowly avoided relegation to the Conference.

Despite one of the lower budgets in the Championship, Burnley have won promotion twice to the Premier League in the last six years.

Outcome: They were unable to avoid immediate relegation in 2010, going down with two games to spare. They surprised many by returning to the top flight in 2014, this time under boss Sean Dyche. Top scorer Charlie Austin had been sold to QPR and Dyche had to work on a tight budget, heavily relying on free transfers and the loan market. They are currently bottom of the table and five points adrift of safety.

They said: "We had 36,000 supporters at Wembley, which is about half our population. When Manchester United play at home there are more people at Old Trafford than in the whole town of Burnley." - Ex-Burnley boss Owen Coyle in 2009

Non-league to Premier League in 27 years

Journey: Wigan Athletic did not come into existence until 1932, making them the youngest club to be promoted to the Premier League. They only joined the Football League in 1978. It began well enough but, in 1994, they finished fourth from bottom in the lowest tier and average crowds had dropped below 2,000.

The turning point came in 1995 when local businessman Dave Whelan, a self-made millionaire through his sportswear business, bought the club and immediately targeted the Premier League. The Latics, who moved to the JJB (now DW) Stadium, achieved that aim on the final day of the 2004-05 season with a 3-1 win over Reading.

Outcome: This is more like it, Cherries. Wigan took to Premier League life easily and spent much of their season challenging for European football as well as reaching the League Cup final. They stayed in the top flight for eight seasons, until relegation to the Championship in 2013, days after winning the FA Cup. The Latics are now on the verge of dropping into League One.

They said: "Any professional football club could have the dream of playing in the Premier League and winning a major trophy and Dave Whelan showed the way to do that. It is a great football story and I am sure it will inspire many generations to come." - Former Wigan boss Roberto Martinez

The smallest club to win the Premier League

Journey: Blackburn were far from top-flight novices prior to their promotion in 1992, winning the First Division in both 1912 and 1914 and enjoying spells in the top tier in the middle of the century. But, from 1966, the mill town experienced a 26-year exile from the elite.

A defeat in the 1989-90 Second Division play-off semi-finals was followed by the takeover of local steelworks owner and lifelong supporter Jack Walker, which started Rovers' transformation into Premier League champions. They appointed Liverpool legend Kenny Dalglish as manager and, in his first season, he took the club into the Premier League via a play-off win over Leicester.

Outcome: This will take some beating. Rovers finished fourth and second in their first two seasons in the top flight. They then made history by becoming the only town club ever to win the Premier League when they lifted the trophy on the final day of the season at Anfield.

Barring one season back in the Championship, they spent 20 years in the top flight, playing in the Champions League and winning a League Cup. However they were relegated in 2012 and are now ninth in the second tier.

They said: "No club our size will ever win the Premier League again. We had a bit of money but it was more to do with spirit, attitude and Kenny's ability to sign the right players. Local businessmen like Jack Walker couldn't compete with the money we are talking about these days." - Former Blackburn Rovers striker Kevin Gallacher.

Journey: After 109 years, the Tykes gained entry to English football's elite division for the first time in 1997 with a 2-0 win over Bradford in the penultimate game of the season.

Because of their yellow away shirts, the Oakwell crowd were often known to sing "it's just like watching Brazil" in the stands as manager Danny Wilson secured his place in club folklore, building a team who played stylish, attacking football.

Outcome: Bournemouth fans look away now. Barnsley were immediately relegated after finishing 19th in the Premiership, five points adrift of safety. They entered administration in 2002 and were relegated from the Championship last season.

They said: "We've done it the right way, working hard and honestly and playing good football. These fans have seen a lot of hard times here, they deserve this." - Barnsley boss Danny Wilson

'Landing on the moon'

Journey: Blackpool won the 2010 play-off final over Cardiff to clinch a top-flight place for the first time since 1971.

Achieved on the lowest wage bill in the Championship, it was witnessed by one of the smallest average attendances in the division and masterminded at a dilapidated training ground still in use since the days of the legendary Stanley Matthews.

Outcome: The Tangerines were relegated on the final day of the season, despite attacking performances that brought them much praise.

They almost won promotion again the next season but, since then, have had five managers, been relegated to League One for next season after only four league wins, and fans are protesting against owner Owen Oyston and son Karl.

They said: "It feels like we have landed on the moon without a space rocket or a helmet." - Striker Brett Ormerod. 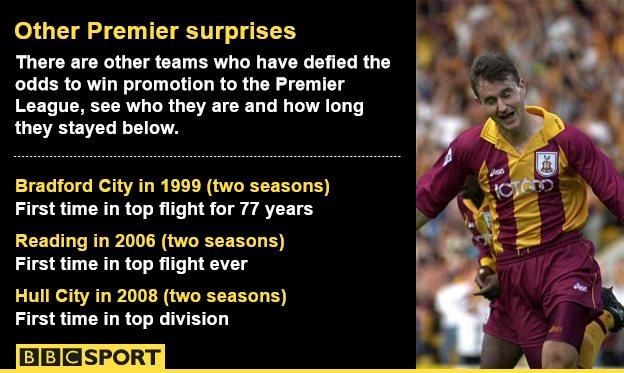