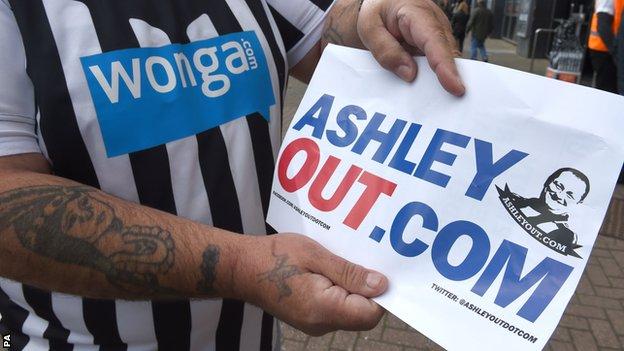 A section of Newcastle supporters are planning peaceful protests at Mike Ashley's Sports Direct stores in the latest action against their club's owner.

Many fans have criticised the ambition of Ashley, after it was revealed the club had more than £34m in cash assets.

Fans are also being asked to repeat last Sunday's boycott against Tottenham on Saturday.

"The boycott for the Spurs game was only the start," a statement said.

The Magpies last month announced record annual profits of £18.7m but spent nothing in January's transfer window and have won just one of their last 10 matches.

Fan-run website ashleyout.com said: "We have seen a vast increase of awareness for Mike Ashley's failed ownership of Newcastle United in the local and national media and amongst fans who were previously resigned to apathy.

"These fans have now hopefully found a vehicle to express their profound dissatisfaction with the situation the club finds itself in, which is essentially one of a proud sporting institution transformed into a giant advertising vehicle.

"We would like to widen the campaign at this stage to include Mike Ashley's main interest, which is Sports Direct and affiliated companies."

Ashley, who also owns almost 9% of Rangers, held "amicable" talks about his Ibrox shareholding on Wednesday with the new board of the Scottish Championship club.