It is a question football fans often ask of their heroes after a suspect performance or miserable defeat - how hard were they really trying?

But the players at League Two strugglers Cheltenham Town have "promised" that their supporters need not worry. 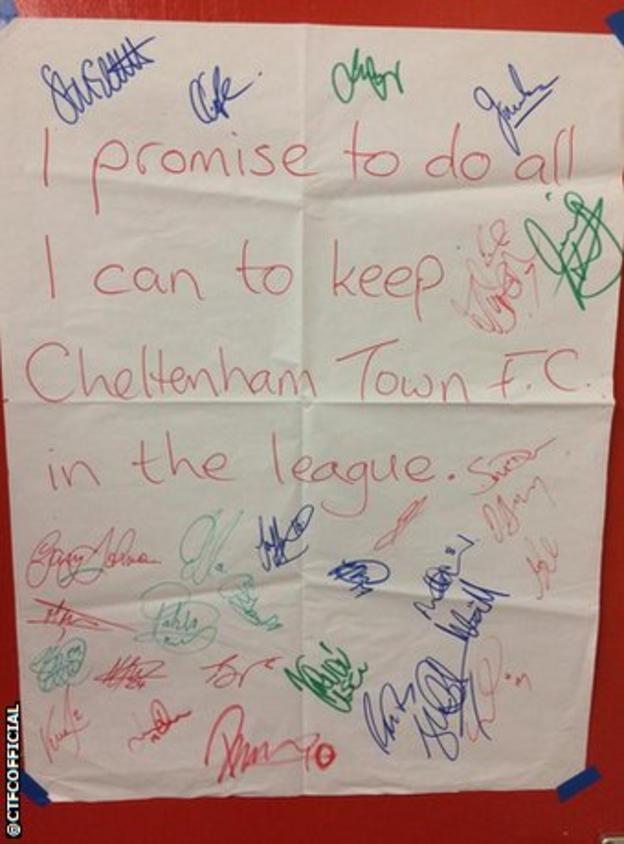 "When I first came in I asked all the lads to sign a sheet of paper to say that they promise they'll give everything to keep Cheltenham Town in the Football League," explained manager Gary Johnson, who was appointed last month.

The Robins are currently 23rd - second from bottom in the table - one point adrift of Hartlepool United, who are 22nd and on course to stay up as things stand. Cheltenham have two matches left to change this and preserve their Football League status.

The club have not been in non-league football since winning promotion from the Conference in 1999.

"When you come to this stage of the season you need everyone to give everything for the cause," the 59-year-old former Bristol City and Yeovil Town boss told BBC Radio Gloucestershire.

"You also need team-mates you can rely on. The lads that are here need to know they can rely on the others - and if they can't rely on some then you have to move them on."

We will soon find out whether Johnson is able to work his magic at Cheltenham, but here are some other unusual motivational techniques employed by managers down the years...

Can you write me a letter please, mum?

With Liverpool closing in on their first-ever Premier League title, it seems manager Brendan Rodgers was willing to give most things a go to fire up his players.

It was reported last month that the Northern Irishman decided to get each of the players' mothers to write a letter about their son, which was to be read out at a team meeting before games.

Positivity was not enough for Liverpool, however, as Manchester City went on to lift the title.

With Hull City losing 4-0 during their maiden season in the Premier League, the now Southend United manager sat his players down in front of the travelling supporters during the break and lectured them for three minutes.

All the public hand-waving and finger-wagging could not prevent the Tigers losing 5-1, but it did pave the way for Jimmy Bullard to celebrate in style after scoring at the same end 11 months later.

Last March, Bristol City found themselves struggling in League One and in danger of suffering successive relegations.

In search of a little extra inspiration, manager Steve Cotterill turned to cancer patient Mark Saunders, who gave the players an emotional pre-match speech before they took on Gillingham at Ashton Gate.

Sam Baldock and Simon Gillett scored as City went on to secure a crucial 2-1 victory to move them out of the bottom four and, in the 13 months since, the club have gone on to lift the Football League Trophy and League One title. Some turnaround.