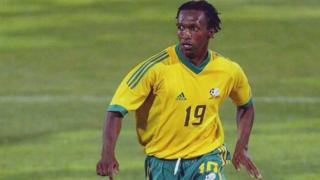 Listen again to an exclusive BBC Sport interview recorded in 2008 with former South Africa captain John 'Shoes' Moshoeu, who passed away on Tuesday.

Moshoeu will be remembered as a Bafana Bafana legend and the BBC also spoke to former South Africa coach and then AmaZulu coach Clive Barker at a time when he was still picking the midfielder when he was aged 42.