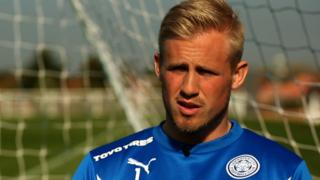 Leicester's goalkeeper Kasper Schmeichel says the team must "control their emotions" in their fight for Premier League survival.

The Foxes face fellow relegation strugglers Burnley on Saturday, in a match that could determine the fate for both clubs come the end of the season.

Leicester have been in the relegation zone for much of the campaign, but three consecutive victories have given the team and supporters hope that the great escape could be on.

Watch more from Kasper Schmeichel on Football Focus on Saturday, 25 April at 12.15 BST on BBC One and on the BBC Sport website.