Rotherham United have been deducted three points and fined £30,000 for fielding an ineligible player.

The Millers played Derby defender Farrend Rawson in the 1-0 win over Brighton on 6 April, a day after the 18-year-old's youth loan had expired.

Losing the three points means Rotherham are one point above the Championship relegation zone with three games left.

United intend to appeal against the Football Disciplinary Commission decision before the 1 May deadline.

The last round of Championship fixtures will be played on 2 May and means the final standings may not be settled until after the end of the season.

Despite the deduction, Millers boss Steve Evans, whose side host Norwich on Saturday, said their fate would be decided on the pitch. 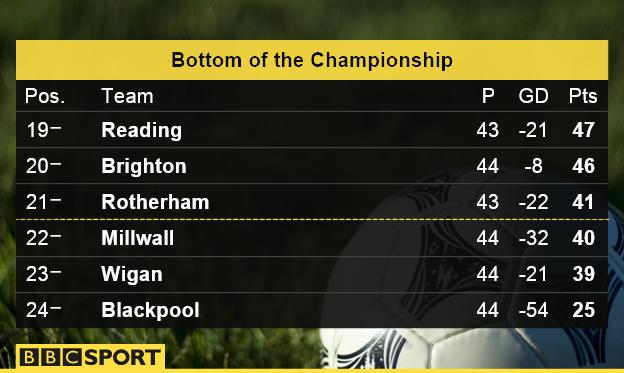 "If we can beat Norwich it would go a long way to us being part of the Championship next season. If we get the three points, we all know we would be a gnat's whisker away, regardless of the Football League's decision."

In a statement, Rotherham said they were "very disappointed" by the decision.

"We await the reasoned judgement of the FDC and once we have received it we will issue our appeal after discussion with Jim Sturman QC," it said.

"In the meantime we are confident that our team possesses the will and spirit to ensure that the points deduction is academic by securing our Championship status on the pitch."

Half of Rotherham's fine has been suspended until the end of next season, and the club must also pay the costs of the hearing.

The ruling boosts Millwall's and Wigan's hopes of avoiding the drop, although Rotherham have three games left to play compared to the other clubs' two.

After Saturday's visit of the Canaries, Rotherham host Reading on Tuesday, before a trip to Leeds on the final day of the campaign.