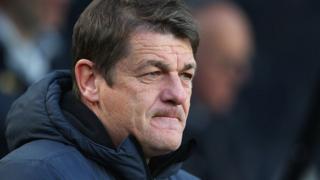 The Magpies suffered a sixth successive loss in front of a crowd of 47,427 - their lowest in the league this season - as fans protested against owner Mike Ashley outside St James' Park.

Carver is "pleading" with fans to "get behind the team" amid news of more protests planned for Saturday's home match against Swansea.