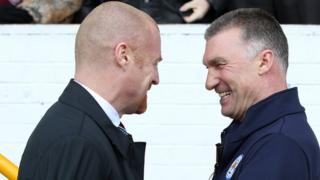 Leicester manager Nigel Pearson and Burnley boss Sean Dyche look ahead to a potentially crucial match between their sides in the Premier League this weekend at Turf Moor.

Both sides were promoted to the top flight last season, but find themselves in the relegation zone with the season entering its final stages.

Burnley are currently bottom. two points from safety with five games remaining, while the Foxes have won three matches in a row and have six left to play.