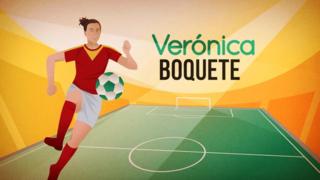 Footballer of the Year profile: Boquete

BBC Sport looks at FFC Frankfurt and Spain forward Veronica Boquete, who is nominated for the BBC Women's Footballer of the Year award.

Boquete has been nominated along with Marta, Asisat Oshoala, Kim Little and Nadine Kessler, with the winner announced on BBC World Service on 26 May.

Fans are being given the chance to vote for the winner - the first award of its kind hosted by a global broadcaster.

Find out how you can vote here.