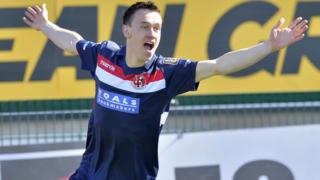 Crusaders winger Paul Heatley is selected as Ulster Footballer of the Year by the Castlereagh Glentoran Supporters' Club.

Heatley's goals and assists have been a key factor in the north Belfast club winning the Irish Premiership title.

He reflects on a successful 2014/15 season after being announced as the winner at a special ceremony at Stormont on Friday.