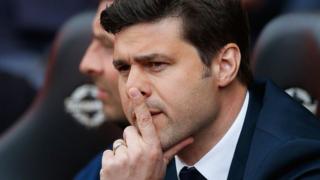 The Argentine "thanks" the visiting supporters saying it was the first time he "felt the love" from Spurs fans.