Watford have a better chance of staying in the Premier League next season because they have gone up automatically rather than via the play-offs, says former manager Graham Taylor.

The Hornets secured promotion on Saturday after beating Brighton 2-0.

When Taylor led them up in 1998-99 through the play-offs, they were then relegated the following season.

"By the time we knew we were promoted, the signings we wanted to make had already gone," Taylor told BBC Sport.

"We were not able to sign enough new players soon enough as far as I was concerned."

It has been an extraordinary turnaround for Watford after a chaotic start to the season. When Serb Slavisa Jokanovic was appointed head coach in October, he was the club's fourth boss of the campaign following Beppe Sannino's departure in August and short reigns for Oscar Garcia and Billy McKinlay.

Sannino resigned amid suggestions of player unrest, Garcia stepped down after 27 days in charge because of ill health, and McKinlay was replaced by Jokanovic after just over a week, with Watford owner Gino Pozzo saying it was in the "long-term interests" of the club. 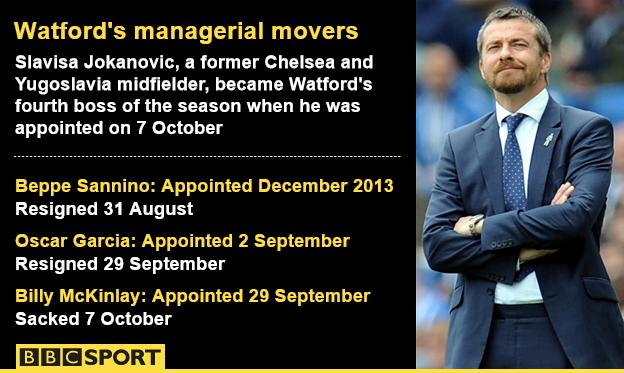 Can they stay up next season?

However, he warned they face a "big challenge" to stay in the Premier League next season.

"It's not easy to go into the Premier League and maintain your place. Very few teams have done that but I very much hope Watford will do."

The Hornets were also promoted to the top flight under Aidy Boothroyd in 2005-06, but again came straight back down.

Between 1978 and 1982, Taylor, under then chairman Sir Elton John, led Watford to the top flight from the old Fourth Division through three promotions in five seasons.

They then finished second in their first season in the top division, but Taylor warns that such achievements are effectively impossible in the cash-rich Premier League era.

"The days of a Watford coming up and doing what we did are gone," he said. "All the money that's gone into the Premier League has not been of help to all of the clubs."

Taylor says that club owner Pozzo and head coach Jokanovic have to assess quickly where the squad requires strengthening.

"It may seem a harsh thing to say but they have got to be thinking seriously: 'Do Watford have the necessary amount of talented players who will be able to handle the Premier League?'

"If he feels they haven't, I would hope they would try to remedy that before the next season starts.

"Everybody wants to be recognising how well this team and players have done. But there's always a future - the next day and the following season. They have to prepare themselves for it."

Pozzo also owns Italian club Udinese and Spain's Granada and Watford have brought in a number of loan players from both sides. Taylor says it will be "very interesting" to see if this policy is continued.

Jokanovic has 'delivered the goods'

Taylor has been impressed by how Jokanovic has led Watford since he was appointed head coach at Vicarage Road in October.

"Because of the career I had, I don't like to get over involved," Taylor said. "Those days are gone now - they're in the history book. Even though it's very nice when people remind me of it, I never want any present manager to think I'm there, overlooking what they're doing.

"But I think he's done excellently. The current owners have had four managers but this fella has delivered the goods, along with the team."

Taylor says Watford have been deservedly promoted, but says he is concerned as to whether the current squad will be strong enough defensively when they face Premier League teams.

Up front, he has been delighted by the contribution of captain Troy Deeney, 26, who has scored 21 goals this season.

"You see him leading the players, talking and shouting. He's scoring the goals for them as well and he's done extremely well. He has been an extremely valuable player to them.

"Like the other players, next year he will face better players and centre-backs than he has in the Championship. But for what he's done so far for the club, he's been absolutely first-class."

Special achievement for a 'small town'

"Watford has a population of about 75,000 - it is not a big town. Because of the association of [former chairman] Elton John and myself previously, people think it's a bigger town and a bigger club than it actually is. It's a small town," Taylor said.

What Watford means to Taylor

"I shall follow Watford's results until the day I die and I'm very, very happy for them.

"One of my daughters still lives in the area and my grandson is a season-ticket holder. I always get a report back off my grandson as to what they've done. Watford is a very special place to myself and my family and the football club is very, very special."

Sannino, who started the season in charge at Watford, was quick to congratulate them on promotion.

He wrote on his Facebook page: "A perfect end to a wonderful Championship: victory. Proud of the Watford team who never gave up and that deserves to stand on the top step of the podium.

"A special greeting to the fans that I will never forget and that will remain in my heart forever. Again congratulations."

'You could see the celebrations on the bus'

Odion Ighalo, one of Watford's two 20-goal strikers along with Deeney, added: "When we finished, our game we were watching on our phones, listening to the results. We were waiting and waiting until the last minute, then you could see the celebrations on the bus.

"We work hard together as a team and we are in the Premier League. But we have a job to do and make sure we are the champions."