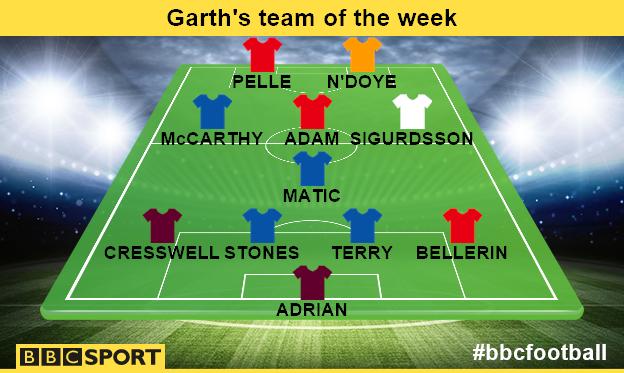 As the season reaches the final weeks, the importance of games at both ends of the table becomes amplified.

Chelsea produced a professional performance in a goalless draw away to Arsenal and, even though Manchester City closed the gap with a dramatic win over Aston Villa, the Blues' march towards the Premier League title is nearing its conclusion.

At the bottom, Leicester clinched their fourth successive win, beating relegation rivals Burnley to move out of the bottom three for the first time in five months. Sunderland replaced them in the drop-zone after a draw away to Stoke.

These were my stand-out performers on a potentially crucial weekend.

This gentlemen has had a wonderful season for West Ham.

His penalty save from Charlie Austin was straightforward enough during Saturday's goalless draw at Loftus Road, but the block on Matt Phillips' powerful drive was absolutely superb as QPR were desperately searching for a breakthrough.

Adrian's penalty save was his third this season and he became the ninth goalkeeper to make three consecutive spot-kick saves in the Premier League.

West Ham boss Sam Allardyce went to great lengths after the match to impress on the media just how important Adrian has been to his team this season.

If, by some quirk of fate, Allardyce is not the West Ham manager next season the club will do well to keep a very keen eye on Adrian because he and others might decide their loyalty lies with the manager.

This lad is playing out of his skin.

It took a superb save from Rob Green to push Aaron Cresswell's late free-kick onto the bar and keep QPR in the game.

It was the one of the few chances that West Ham carved out for themselves.

What a shame that manager Sam Allardyce seems to be auditioning for his own job with weeks just left on his contract when it was he who brought Cresswell to the club and gave him the confidence and the platform to perform as he has.

Perhaps West Ham's owners David Gold and David Sullivan might think about that when they give Sam Allardyce his end-of-season appraisal.

Arsenal against Chelsea on Sunday finished goalless and was never going to be a classic bearing in mind the stakes were so high for both these title-chasing sides.

Regardless of what Jose Mourinho might say Chelsea went to the Emirates not to lose and played accordingly.

This played perfectly into the hands of Blues skipper John Terry, who looked imperious.

What a time to get your first goal in the Premier League!

Games don't get much bigger at Goodison Park than against Manchester United.

The headed goal by John Stones was a further indication of the player's growing confidence.

I'm sure playing alongside Phil Jagielka has helped enormously and if he continues to develop at this meteoric rate he could be soon partnering his club team-mate on the international scene for England on a regular basis.

Arsenal's attitude towards their meeting with Chelsea was excellent. They did everything they could to make it a spectacle.

Hector Bellerin did as much as anyone to prevent Chelsea tighten their grip even more on the title when he got back to head Oscar's chip off the line.

The full-back almost immediately went on an attack that resulted in a penalty appeal when Gary Cahill was alleged to have handled the ball in the box.

This lad is growing in confidence with every game.

Nemanja Matic has played a much bigger part in Chelsea's success this season than we first realised.

His performance against Arsenal was so impressive.

Everyone is talking about John Terry's performances this season but without Matic performing so effectively in front of his captain and making it so difficult for teams to get to him, it may well have been a very different, and much tougher, campaign for the Blues.

James McCarthy was outstanding for Everton against Manchester United.

McCarthy and his accomplice Gareth Barry did an excellent job protecting their back four against United's raids, however it was McCarthy who looked more prepared to venture into the opposition's penalty area and he got his reward for his endeavours.

Perhaps all those clever clogs who were so keen to get on Roberto Martinez's case might now realise their league performances earlier in the season were actually down to the demands of the Europa League rather than any lack of tactical awareness from their manager.

Left foot, right foot, they are all destined for the back of the net having been struck by Charlie Adam.

His equaliser for Stoke against Sunderland was struck with his right foot, but he had another shot brilliantly saved by Sunderland goalkeeper Costel Pantilimon with his favoured left foot.

The goal he scored against Chelsea at Stamford Bridge must go down as the goal of the season but it doesn't seem to matter where he is on the pitch. Once he lines himself up and gets the goal in his sights, goalkeepers beware.

You cannot have a serious conversation about Swansea City or Gylfi Sigurdsson without mentioning manager Garry Monk.

There is no doubt that both men have been pivotal in Swansea's impressive season.

Sigurdsson's goal against a Newcastle side in freefall was taken with his usual cool demeanour.

His general contribution and all-round play have been immense - and it was Monk who brought him back to the club.

It rather begs the question why Tottenham ever let him go in the first place.

Two goals from the Italian against Spurs on Saturday suggests he is well over the lean spell that he suffered between late December and April when he went 14 Premier League games without scoring.

His first goal was a lovely old-fashioned toe-poke that took Tottenham goalkeeper Hugo Lloris by surprise, but his second was the most glorious header and reminiscent of one of his predecessors in the Italy forward line - Pierluigi Casiraghi.

Their meeting with Crystal Palace had a familiar ring to it for Hull City.

Decent football, plenty of possession but far too many missed chances.

They had won only five times on the road in their previous 60 games before Saturday, which tells its own story.

N'Doye's first miss following a wonderful ball from Robbie Brady had manager Steve Bruce holding his head in his hands.

His second chance came after some wonderful work by Tom Huddlestone only for the Senegal international striker to drag his shot wide with the goal staring him in the face.

In the end N'Doye could have scored four, but the two that he did get have given Hull City a lifeline in their battle against relegation.